In some cultures the foot of a rabbit is carried as an amulet, believed to bring good luck. At Tumbledown Farm it is carried by Stilton to be used in a game of fetch. I was busily trying to tie up my sweet peas in the veg garden earlier this afternoon then I put my hand down and felt something small and furry! To my horror it was a rabbit's foot. I had noticed out of the corner of my eye that Stilton had been playing with something with great energy for the last half hour. Until that moment I had been blissfully ignorant of what it was.

I immediately threw the foot away from me in disgust. However this instilled great delight in Stilton, a cat whose favourite game is fetch. 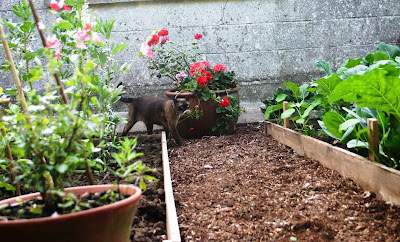 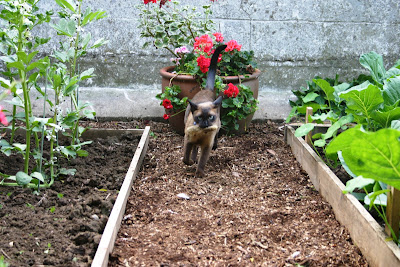 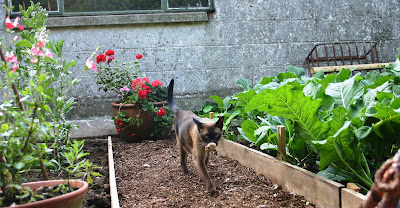 So he brought it back to me. And I threw away. It landed in the broad beans. 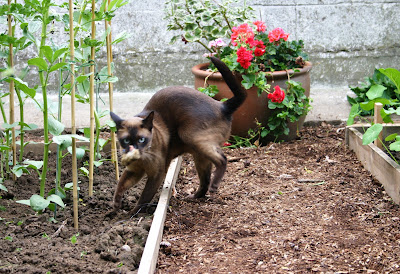 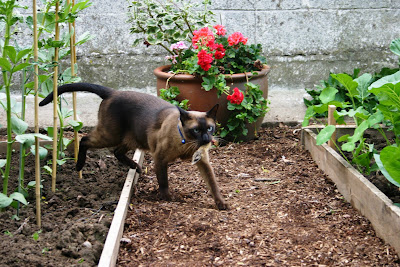 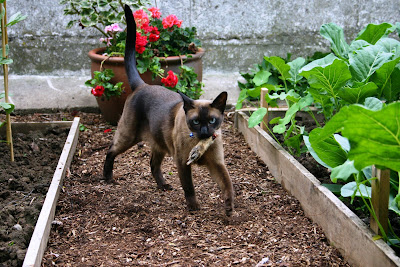 And he brought it back again. This game went on for some time. I suppose any other normal person would have been totally disgusted with him and not indulged him. This is Stilton's first summer of being outside. For the first five years of his life he has been a house cat. He is loving the great outdoors and he was so excited with his rabbit foot that I didn't have the heart to confiscate it. He was immensely proud of it. 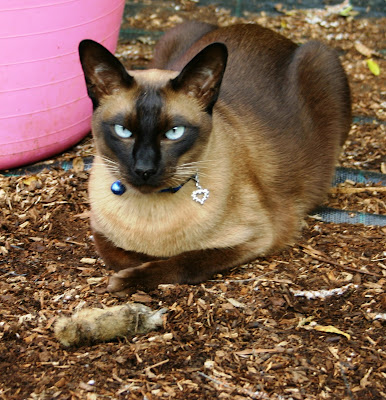 A friend of mine this week has been worrying about her pal who is giving up all her time to help out her teenage daughter. Not having children myself I have been unable to offer any meaningful advice. This afternoon however I was considering her predicament and thinking about my own purr baby. After ten minutes of throwing Stilton's rabbit foot for him, I came to the conclusion that there are just some things that only a mother will do and it is probably best to just take a step back and let them get on with it!
Posted by Rothschild Orchid at 18:59

Email ThisBlogThis!Share to TwitterShare to FacebookShare to Pinterest
Labels: Stilton

Ah yes. Elizabeth Thomas in her book "Tribe of Tiger," begins with the main thing you need to know to understand cats is that they are carnivores. I have three beautiful beasts myself and although they are indoor cats, I once found a dead sparrow in my hallway, and they are always dumping stuffed animals at the foot of the bed to honor me(?). Love your blog and beautiful pictures. Greetings from faraway Berkeley California.

It is true, they are brutal carnivores, Stilton spent many years carrying around stuffed teddies and joyfully munching spiders as if they were exoitic treats before he discovered the great outdoors and rabbits feet.

I hate the idea of little creatures being killed but I can't help but love the cunning and skill of the graceful hunter.

LOL! I wonder what happened to the rest of the rabbit. This will be just the beginning of it if Stilton is just getting used to the great outdoors. There will no doubt be a succession of unpleasant and decaying bits of animals bought for your delectation - and the cats get very snitty if their new playthings are taken away.