Well I have a confession to make. I am an RHS virgin. Having not been bitten by the gardening bug until relatively recently, I have never been to an RHS Flower Show. That was until yesterday when at long last, much to my excitement I had the opportunity to visit Hampton Court Flower Show.

I didn't know what to expect, and boy was I in for a surprise!

I guess I should have realised it would rain. Five minutes after making it through the gates the heavens opened. "No worries!" I thought, "I'll just make my way over to one of those marquees and have a pootle." So I quickly made my way over to the nearest marquee. It was crammed with people sheltering from the rain, eating their home made sausage sandwiches and begrudgingly wishing there were more seats to sit on. 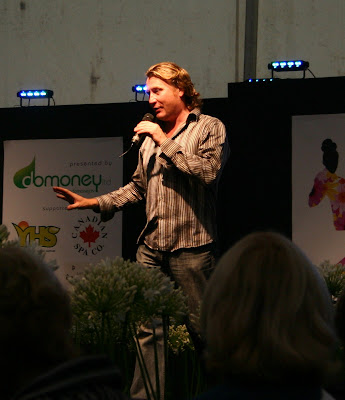 Then all of a sudden, the lights dimmed, gaudy pop music boomed from speakers and out popped this little second hand car dealer who started waffling on about a fashion show. "Ooooh goody I though, it will be like Malvern where there were interesting dresses made from flowers!" I was wrong. Much to my bemusement what I actually saw was procession of ladies in their pants. 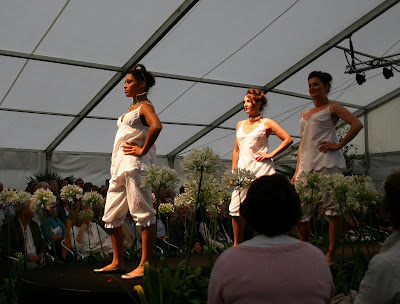 There were big pants. 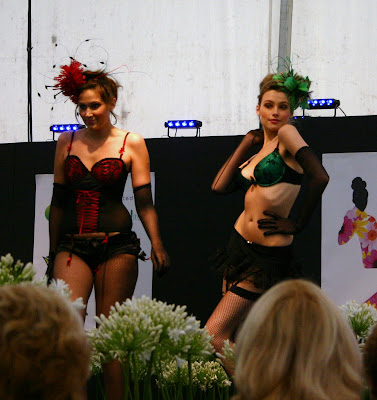 And there were skimpy pants.

Apparently it all had something to do with Henry VIII liking women in their underwear. Unfortunately the funny little car salesman had lost me by this point. My head was reeling. I was in a room full of soggy people watching girls in their undies strutting up and down the cat walk with the heady stench of damp gardeners punching me in the nostrils. "This is not." I thought "exactly what I had expected from my first visit to an RHS Flower Show!" At this point I managed to spot a ray of sunshine out of the marquee door and decided that I really should go in search of some plants. So off I went, eagerly into the unknown.

What did I find? 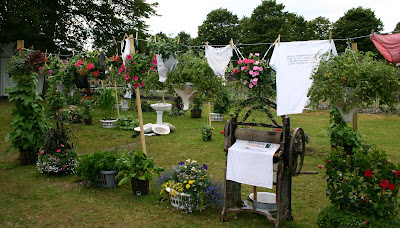 Hanging Bra-skets and Plant Pants.
More pants. From my keen blog watching I had started to pick up that pants were something of a delicacy to gardening enthusiasts. In fact I believe some of them even warned of the forthcoming pants to be displayed. 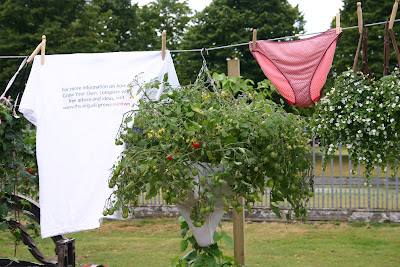 It was rather a fetching display, but as the rain came down the pristine white pants started to stain and began to look rather brown and soiled. This led to the poor woman next to me becoming quite distressed. Looking at a large pair of pants brimming over with tomatoes she exclaimed to her friend "Oh my god! They are soiled! They are used! I wouldn't eat tomatoes out of dirty knickers!"

Well nobody said losing your virginity would be easy. I just never realised quite so many big knickers would be involved!

So did I manage to see anything other than pants?

Tune in tomorrow to find out if I found the plants!
Posted by Rothschild Orchid at 23:10

Oh dear - someone has decided to 'sex it up', haven't they. How sad. As for the pant planters - as liners for baskets, maybe, but it really isn't a good look - especially when it rains!

I'm kind of with the hysterical woman on this, who wants to grow their veggies in Y-fronts with dodgy brown skid marks on?

What could have been witty & wonderful turned out as sad, saggy & stained. A bit of imagination was required.

I had a cracking day there on Tuesday despite the rain.