I have shown snippets of the veg plot this summer but have not posted much about it's development, so before I ramble on excitedly about my my first crops of veggies and cut flowers I thought I better give you a little more background to my main garden project this summer at Tumbledown Farm.

I moved back to Tumbledown Farm in February and the first project I really wanted to tackle was to put in a veg plot. When I was growing up we always grew all our own fruit and vegetables and I hope very much that we will be able to do this again. The smallholding has become very run down in recent years as my parents failing health has meant they have struggled to maintain much of the garden. So the first task was to decide which part of the wilderness to tame and turn into my vegetable garden. In the end after much humming and harring I chose the small orchard infront of the goat house. 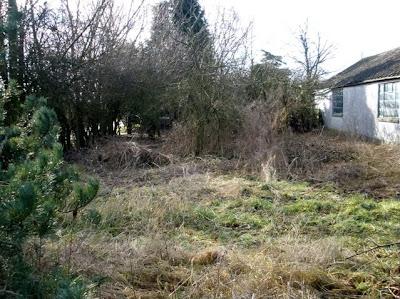 The veg plot in February 2009 before it was cleared.
It was quite a mamoth task to clear it and we had to get the local farmer in to help us grub out the scraggly unproductive plum and apple trees that were planted there. Removing all the tree roots and weeds was even more of a nightmare, but we got there in the end. 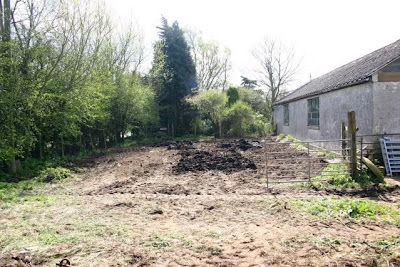 Veg plot cleared at last! March 2009
I decided not to try too much to start with in my first year and began to put in a legume bed with peas, sweet peas and beans. Followed by a small herb bed next to it. 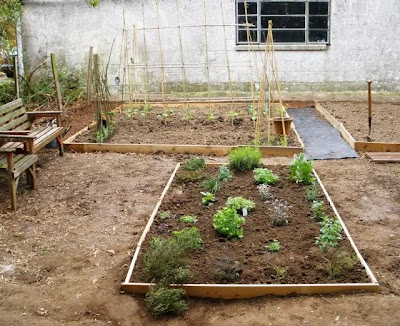 Legume and herb bed April 2009.
Then came the all important compost bins and a few more beds. 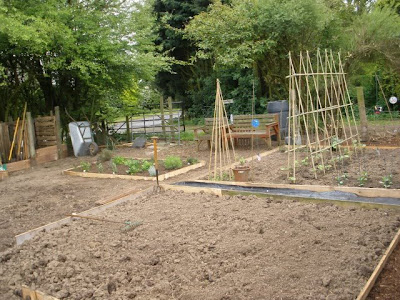 Compost bins and beds April 2009
Brassica's were the next things to go in and I carefully covered them with netting to protect them from the evil fat pigeons that lazily sit in the front garden eyeing up the veg plot. The net seemed to work well against snails too as they got stuck in the net and could be easily removed by me and the hungry thrushes. 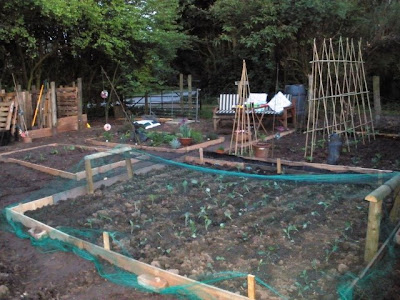 Brassica bed netted over April 2009.
Next to go in were beds of potatoes, tomatoes, onions, sweetcorn, courgettes, dwarf beans, and strawberries. 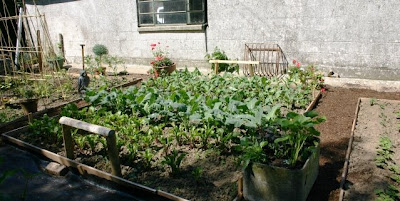 Brassica bed with cabbage, kolrabi, Romanesco broccoli, and beetroot May 2009.
I slowly managed to get down weed matting and bark paths around the beds and by June everything was growing like mad! 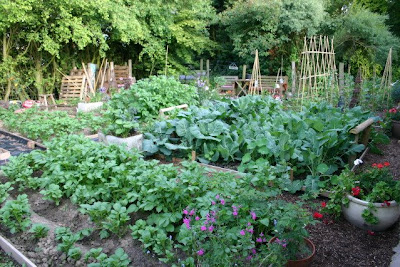 Veg plot June 2009
This month I can barely move for plants, the land is very fertile and everything seems to be exceedingly happy. 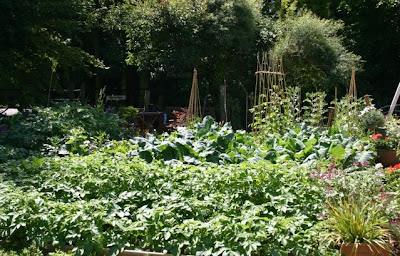 Veg plot July 2009
I have been thrilled to pick massive bunches of wonderful smelling sweet peas. 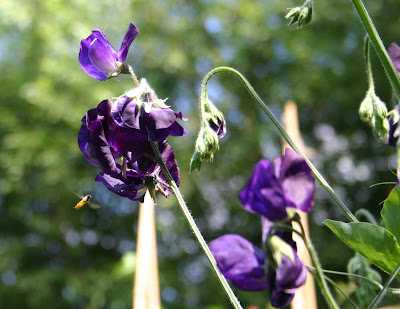 Sweetpeas with hover fly July 2009
The runner beans are growing away furiously and I am very much looking forward to them. We have already scoffed most of the peas and broad beans. 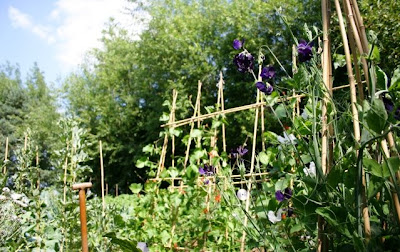 Runner beans and sweet peas July 2009
I have also grown my first ever dahilas from tubers this year. They have just started coming out and are absoluetly gorgeous :o) 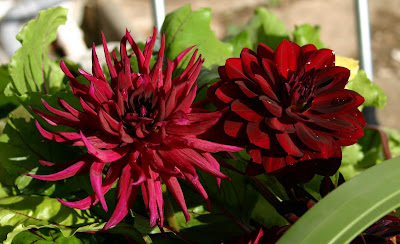 Dahlias July 2009
I picked and cooked the first batch of beetroot on Tuesday. It might be a little thing to the hardened allotmenteer, but this is my first ever veg plot and it has been very exciting to begin to pick and cook the produce. 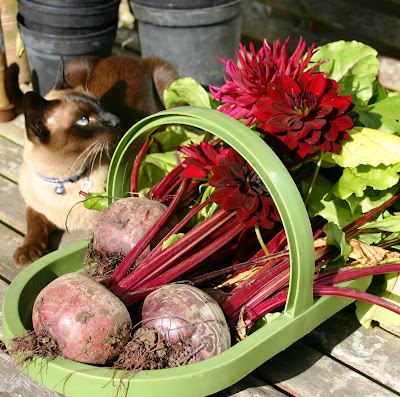 Stilton as always has taken an active interest in every stage of the veg plots develpment.
It is so nice to now just a few months after starting it, be able to pick and cook fresh veggies. On Tuesday we tried a variation on a Christopher Lloyd recipe for beetroot. Beetroot, fresh chives, cream and freshly greated parmesan. Delicious! 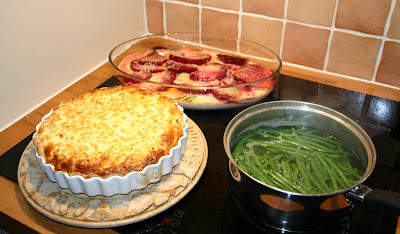 Tuesday's dinner at Tumbeldown Farm!
Posted by Rothschild Orchid at 11:31

Looks like all the hard work has payed off, what a super plot.

It's been hard work, but I've had lots of support from my Aged P's and dear gardening friends who have sent some wonderful seeds and given me lots of invaluable advice :o)

Hi, I followed you over here from the Sea of Immeasurable Gravy. (I was so impressed that you guessed that leaf was Rumex flexuosus and not a watch strap!) This is a lovely blog - the picture of Stilton with the beets is absolutely gorgeous.

Thanks Victoria, I have a thing for slightly unusual plants (especially ones with dark foliage) and I had this one in my Wiltshire garden so recognised it instantly. I suppose I should have bit my tounge and written something witty instead, but I'm a sucker for plant ID's!

Stilon is only happy if he is lounging infront of the camera, trying to take a shot of something in the garden without him being there batting his eye lids at me is nigh on impossible.