Autumn Leaves: A stroll through the Arboretum. 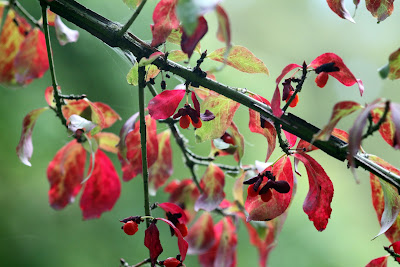 This week I decided to make the most of the changing seasons and took a trip over to Westonbirt, The National Arboretum. Westonbirt Arboretum covers an area of over 600 acres. It was started in c.1829 by The Holford Family and a number of the specimens on display today in the arboretum date back to this time. 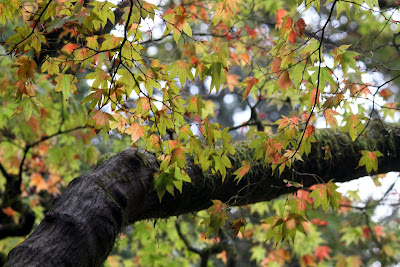 The Japanese Maples were just on the turn, but they were providing a beautiful display of colour even for a largely overcast September afternoon. They whole area was very atmospheric with matt's of moss covering the trunks of several of the trees. It made me wish I was visiting first thing in the morning so that I could see the early light reflected off the dew covered mossy trees. 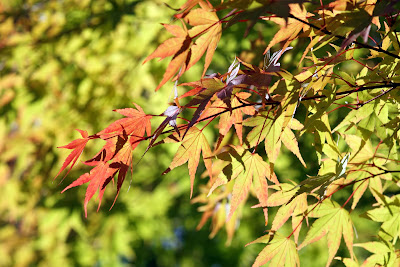 The Acer palmatum "Eddisbury" was particularly striking with the ends of the branches turning a fiery shade of red and reaching towards the sky. 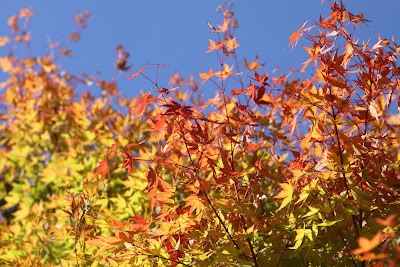 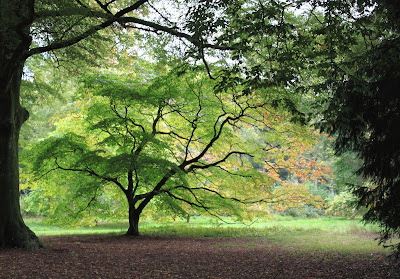 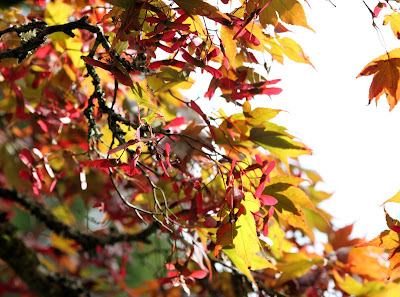 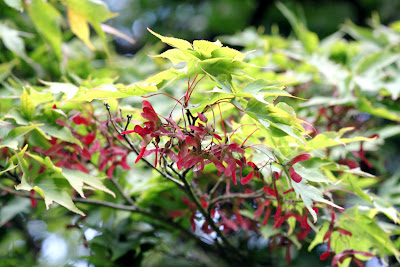 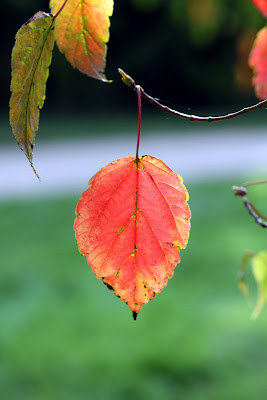 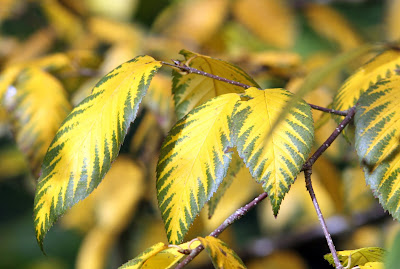 One tree that caught my eye was the Cherry Birch Betula lenta. Not only did it have striking yellow and green leaves, but pretty little catkins and deliciously smooth dark mahogany brown bark. Having done a little research about the tree it appears to have a wealth of uses from making beer from the fermented sap to making a tea from the twigs that can be used as a treatment for fevers, as well of course as being rather beautiful. 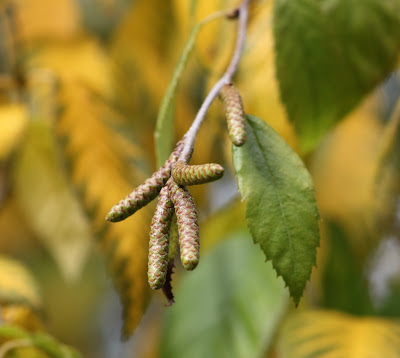 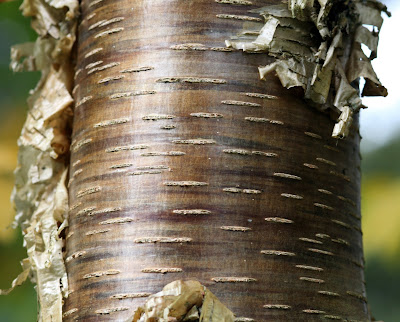 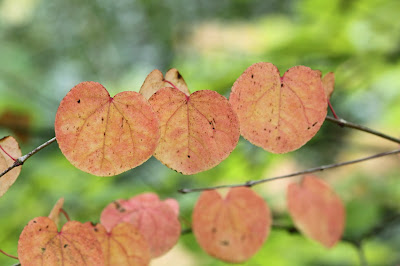 When I first walked past the Katsura Tree I thought what a pretty, delicate heart shaped leaves it had. A young family were looking at the tree and there was a sweet smell in the air, I assumed that one of the children was eating sweets. On my return journey the area was deserted but the sweet aroma of candy floss was still wafting around my nostrils. On closer inspection I discovered that it was in fact the leaves of the tree that were producing the wonderful smell. As the leaves of Cercidiphyllym japonicum break down they release aromatic chemicals that smell of caramel or candy floss. I have to say I was rather taken with this tree. It is a native of Japan and China renowned for its beautiful colour throughout the seasons, but particularly in autumn. 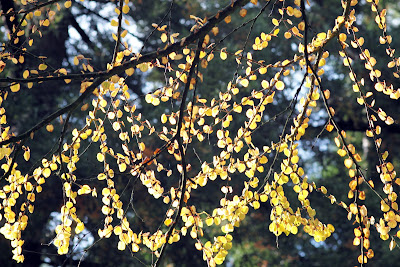 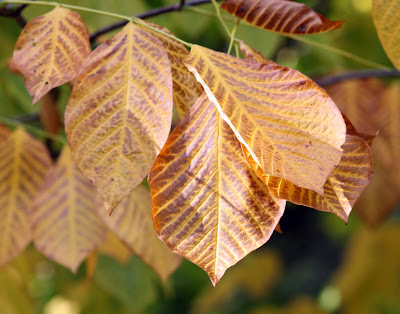 The leaves of the Cladrastis lutea were a wonderful crinkly yellow brown and reminded me of doing brass rubbing's as a child. It is commonly known as the Yellow Wood tree as a yellow dye can be obtained from its heartwood. In June it produces wisteria like white flowers that are strongly scented of vanilla. I will be returning to Westonbirt next summer to investigate this. 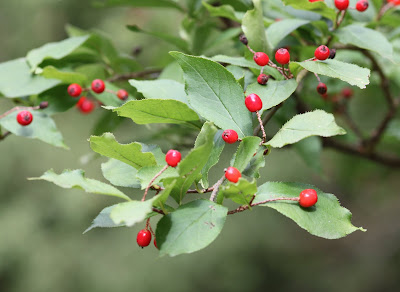 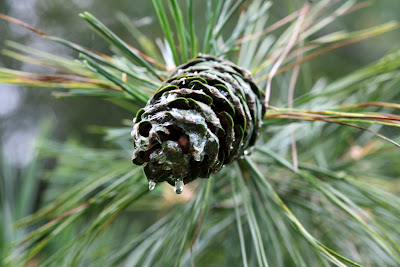 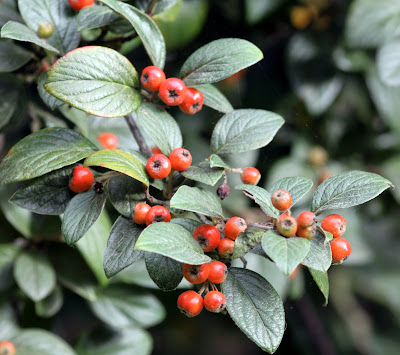 As well as the wonderful displays of autumn leaves there was an array of bright colours on offer in the form of berries on many of the trees I passed including yews, hollies, Photina's and Cotoneaster's. 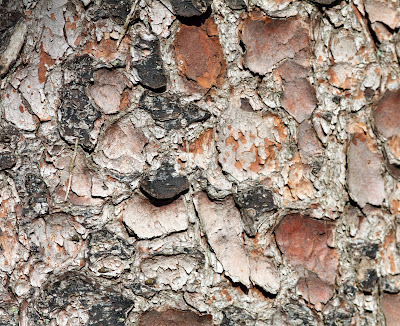 The arboretum at Westonbirt is vast and it will probably take me several visits to see it all. It is definitely somewhere I will continue to visit throughout the seasons as there are so many interesting trees. I passed a wide range of people on my way from young families collecting conkers and pine cones, to people walking their dogs, those just enjoying the trees and numerous photographers with their tripods all after the best autumnal photo's. The car park was full on the day I visited, but it was still possible to wander off the main thoroughfares amongst the trees and feel that you were the only soul there. It was a most enjoyable way to spend a peaceful afternoon and I thoroughly recommend it to anyone in the area. 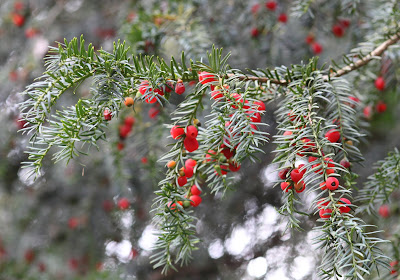 Posted by Rothschild Orchid at 11:52

Lovely pictures and the music went very well with them.

Amazing images! I am glad you joined Blotanical.

I love the Acer photos! Unfortunately, they do not grow in my part of Arizona. So, I will just have to admire your photos.

Thank you very much for sharing.

Thank you so much for the lovely comments :o)

The music is an experiment, I thought I would see if people enjoyed having a little now and then with posts. I tried to pick a tune that went with the autumnal post.

I love acer's. We have a beautiful Acer negundo "Flamingo" in the garden here. No signs of autumn yet though!

Hi, just drop by from Blotanical to visit your lovely blog & post.

what a wonderful colours of gold and fall. Certainly gives a glorious air like time stopped and turned everything in ripe explosion.

Would love to hear your comment about my garden and thoughts from you.
Happy Blogging.

Just catching up with this - sorry I didn't have time to read it when you posted (also unlike everyone else I'm afraid the music was a problem for me - I kept turning it off and it kept turning itself back on again! - I'm so glad you've removed it).

Anyway, your photos are lovely as usual and I'm glad you enjoyed Westonbirt :-D You've reminded me that we haven't been for ages and I want to go again! Have you been to Batsford Arboretum? - that's well worth a visit too.

I'm sorry about the music, I suspected you wouldn't get on with it!

I haven't been to Batsford yet but do have it ear marked for a visit.

And it seems I am not the only one to fall in love with the smell of the Katsura tree at Westonbirt :o) http://www.guardian.co.uk/lifeandstyle/2009/oct/11/autumn-gardens-dan-pearson