A visit to Peckover House gardens. 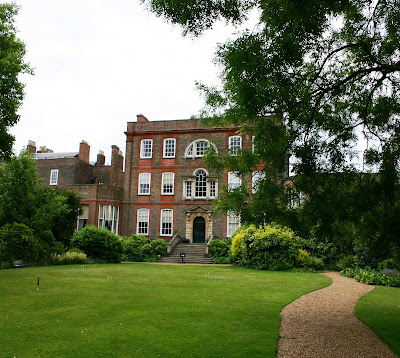 For a number of years as I was growing up we had a smallholding on the North Brink of the River Nene near Wisbech, Cambridgeshire. Anyone who knows The Fens, knows that Wisbech is not he grandest of towns, it is somewhat run down and dilapidated and a little rough around the edges. In Georgian times however it was an affluent and bustling town with it's large docks used by many wealthy merchants. Today, amidst the neglected shops and run down buildings on the banks of the River Nene there still remain some really quite beautiful Georgian properties. They have a delightful untouched charm about them and are often a favoured haunt of the period drama makers. Numerous television productions such as Martin Chuzzlewit, Micawber and David Copperfield have been shot in and around the houses there, and at one house in particular; Peckover House. 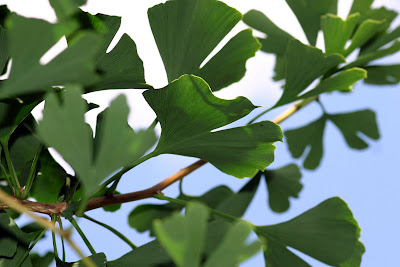 Despite living on the same road as this beautiful Georgian merchants house for several years I never visited it or it's walled gardens. As a child I always remember little tastes of the garden as I walked along the pavement with my mother such as the smell of roses in summer, a dragonfly whizzing noisily past or the leaves of the Ginkgo biloba tree landing at my feet in Autumn. So for many years I have been curious about what lay within the walled garden at Peckover. Tumbledown Farm, the smallholding where we now live lies on the Lincolnshire, Norfolk and Cambridgshire borders so Peckover is only a 30 minute drive away at most. With it being so near I decided this year as I was living at Tumbledown again that I would have to make my way back to North Brink and visit the walled garden. I made my first visit on my Birthday in June but it was a short one as the weather was overcast and grey and soon erupted into heavy rain. So I made a second visit on a glorious August afternoon and explored this small walled garden at my own leisure. 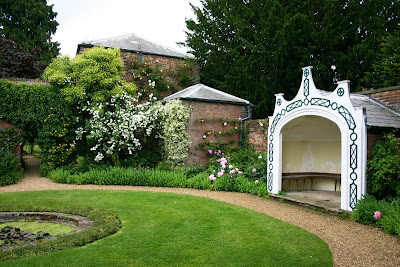 Within the walled garden I discovered that it was divided into several smaller gardens. In June one of the most beautiful was a small walled garden that had a circular lawn with a lily pool at its heart. A circular gravel path ran around it and several varieties of big beautiful frothy peonies effervesced from the borders surrounding it. 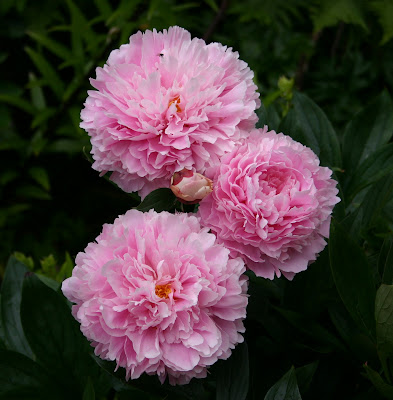 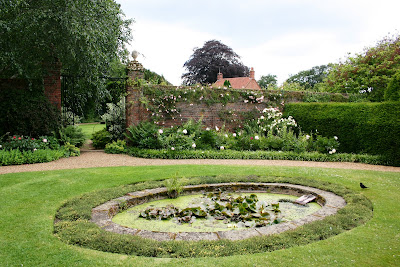 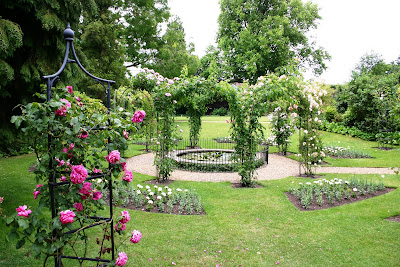 After delighting in so many delicious peonies (they really have to be one of my favourite flowers even though they only flower for such a short time) I discovered that Peckover was crammed to the hilt with roses. Everywhere I turned there was another rose, climbing up an arbour or obelisk, scrambling through a tree or just quietly nestling next to a wall. Absolutely heavenly for a hopeless romantic like me who can't resist shoving her nose in every new rose she spots and taking in the dreamy scents. 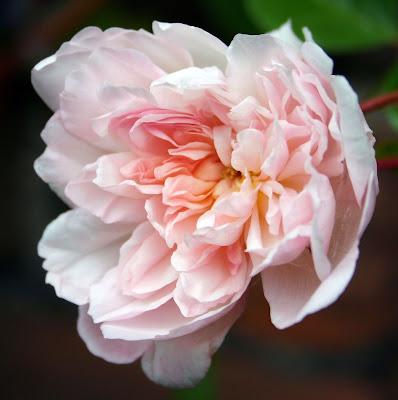 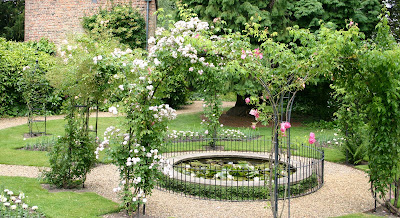 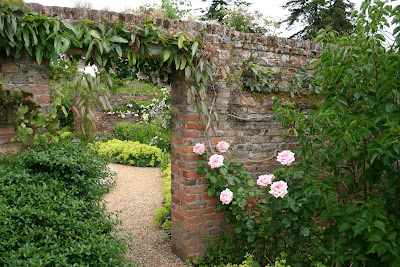 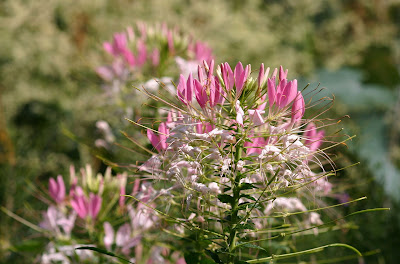 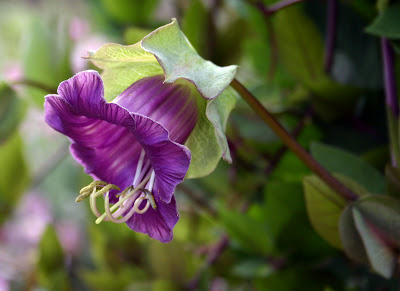 A number of beautiful annual climbers smothered poles and obelisks around the garden. The purple flowers of Cobaea scandens caught my eye in one border and contrasted wonderfully with the obelisk in the border opposite it that was filled with jolly orange and yellow Spanish Flag flowers (Ipomea lobata) waving in the breeze. 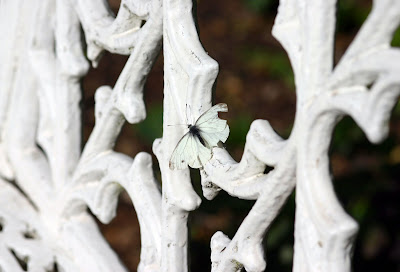 On my August visit to the garden I sat down in a little shaded corner on a beautiful white bench. Golden afternoon light streamed through the trees and lit up the area that was full of swathes of Japanese anemones. It made the garden feel quite magical and lived up to my childhood imaginings of a beautiful secret garden hidden behind that wall that was just too tall for me to know what mysteries lay within. 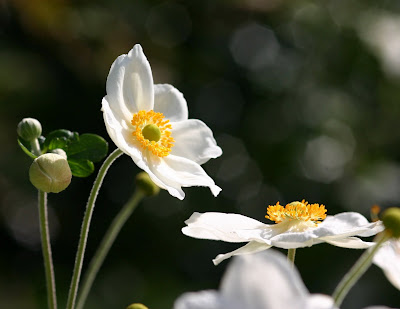 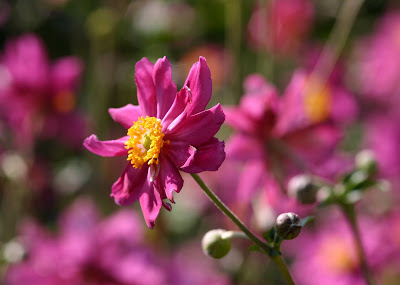 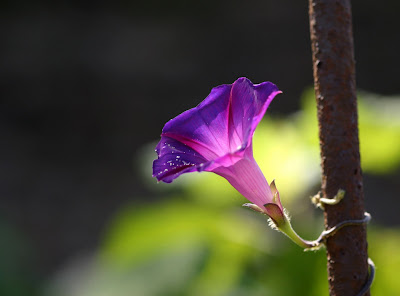 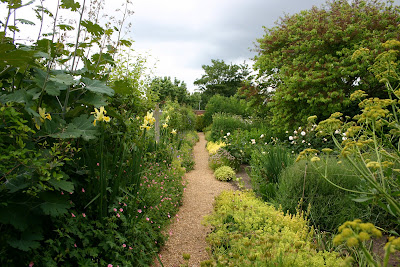 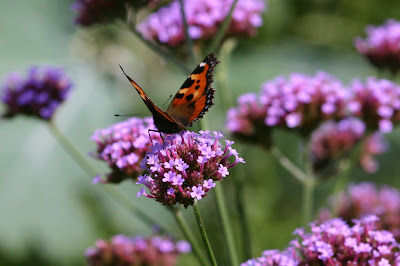 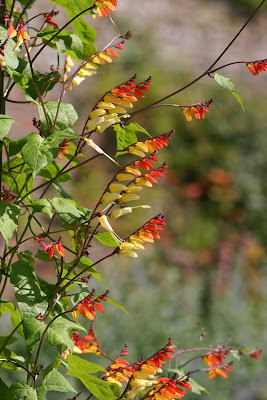 For a small garden there were many beautiful plants, again the bold colours of the red border appealed to the inner Sarah Raven in me (oh heck!) with its dark red Dahlias, Amaranthus, Astrantia and Gladioli. A Victoria plum tree sat in the middle of them and the deep purple skin of the plums dangling from its branches made them look like opulent jewels next to the rich burgundies of the flowers. 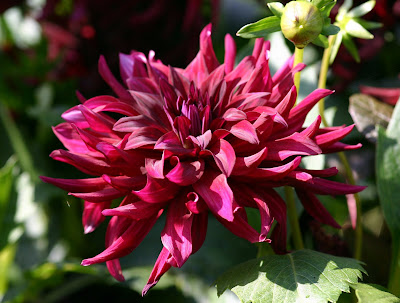 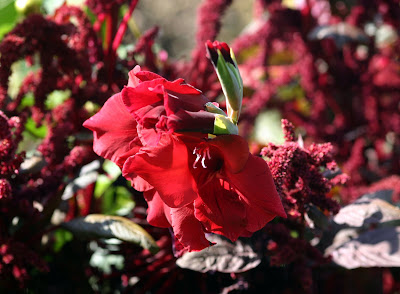 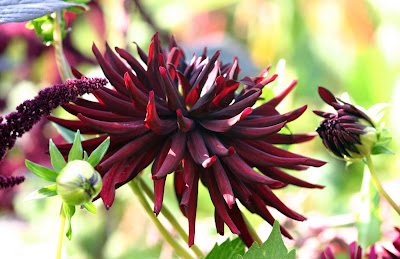 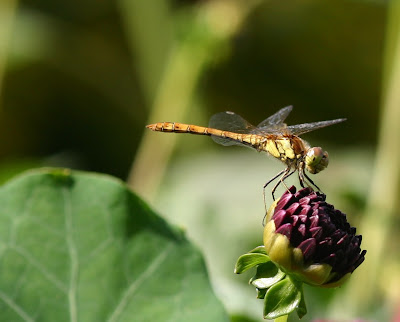 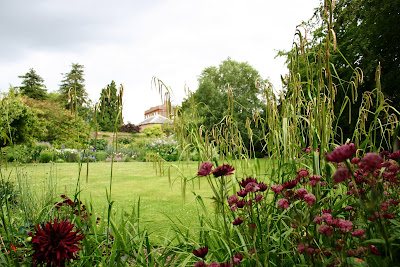 View of Peckover House from garden.

As usual I took a 101 photographs on my visits. There was a beautiful little orangery crammed full of Abutilons, Pelargoniums and Hippeastrum that made a very useful retreat from the rain on my first visit. I have put some extra snaps in a slide show for anyone that needs cheering up from the grey skies and rain currently lurking outside the window. Just click for the show!

Posted by Rothschild Orchid at 10:00

You must admit that it is a tiddly bit cruel to start posting pictures of floaty scented summer gardens when it is bloody nearly December and my office is freezing cold.

Love those dark colours,(also a Sarah Raven fan), could just see a flower arrangement with those and the plums. Yummy!
Gorgeous, gorgeous garden, and so much larger than I expected. Or maybe it is just clever design?

I am laughing my head off at James' comment.
Thanks for posting, it is just breathtaking! Especially the peonies. This is my dream garden.
Rosey

Come on James, there is nothing like a bit of escapism! Sit back, have a Jaffa Cake, throw another kitten on the fire and dream of floaty scented summer gardens ;o)

It is freezing, he's right, but those photos are just what I needed. That one of the white anemone is stunning.

I didn't realise you had gone over to flickr, do you prefer it?

Hi Jane, I've been experimenting with Flickr, it's a bit of a faff to sort it all out but I like the size and quality of the images. Although I shall still be keeping my Photobucket account for not blog frivolities!

Deborah I think it is a relatively small garden, it just has a massive amount crammed into it.

Oh, what a wonderful way to begin my day. It is cloudy outside and rain will begin soon (it does rain in the desert ;0)). I have enjoyed just sitting here and watching your slide show. Absolutely beautiful. I would love to visit some of those old Georgian homes.

I really enjoyed your post. My Dad was born and grew up in Fitton End, near Wisbech. Over the years I have travelled through and to Wisbech many times:) I spent my formative years in not far away Peterborough. The garden looks beautiful - will have to try to get there come the summer. May have even visited as a child if it was open then but can't remember :)

A wonderful tour of the secret garden. Such beautiful flowers to cheer the heart as it gets colder.

What a wonderful post, RO! The Garden is charming!

I'm glad someone else is tempting us with scenes from the past summer - I have a backlog to share over the coming months too. Unlike James, I think it's part of the dreaming about gardens and summers to come, but then I don't have a freezing cold office!

Thanks very much for the award, it's much appreciated and brightened up a dreary post-holiday week :)

I thought of you yesterday - there was an 'Archeological Artist' parked in the Homebase car park. Well that's what the paint job on the car said anyway!

Oh my goodness what sort of camera do you have? Lovely photos of a sunnier time...
I would love to see what you could do with the mists we have here!!

Hi VP, I shall look forward to your future posts, I love looking back at summer gardens when it gets gloomy outside. I went out with the camera earlier and it really was hideous, I only managed a couple of snaps before the heavens opened AGAIN :o(

Your Archaeological Artist sounds interesting. I had the pleasure of working with Victor Ambrus a few years ago, throughly lovely chap and he did some amazing illustrations based on my research for one of the Time Team episodes.

Hi Dan, thanks for your lovely comments. The pictures in this post were taken with a Cannon Digital SLR EOS 300D although I am now using a 500D.

Lovely photos, RO, especially that dragonfly - they'll never sit still for me! I haven't been to Peckover yet, despite us living so near and being NT members - I think R has an aversion to travelling in the Wisbech direction ;) - must try to overcome it at some point.

LOL! I kinda know what you mean Juliet ;o) We still use the vets in Wisbech even though they are miles away as they are one of the only practices that can handle large stock. Peckover is worth a visit if you are passing through, although I was underwealmed by the interior of the house as it's original contents was sold off before it was handed over to the National Trust.

Dragonflies are tricky; they tend to have a favourite resting place, if you watch them for long enough it is worth the wait!

Thanks so much for sharing your visit to Peckover house with us. I love the dragonfly photo, and the slideshow made my day.

It's just gorgeous there! I enjoyed the tour!

Hi Orchid, ignore James and keep on posting those summery shots! They warm our hearts if not our hands. Good one about the kitten on the fire too. The idea of a secret walled garden is the stuff of daydreams that will get us through the winter, keep up the good work. The dragonfly shot is superb. :-)
Frances

Hi Ruth! Your final slide show made my day, your blog having started it.... everything I love about British Gardening - including knowledgable writers on same! Thanks! Jack PS: what does an Environmental Archaeologist do??? A post on, please, when you find nothing gardeny in these wintery days! Jack