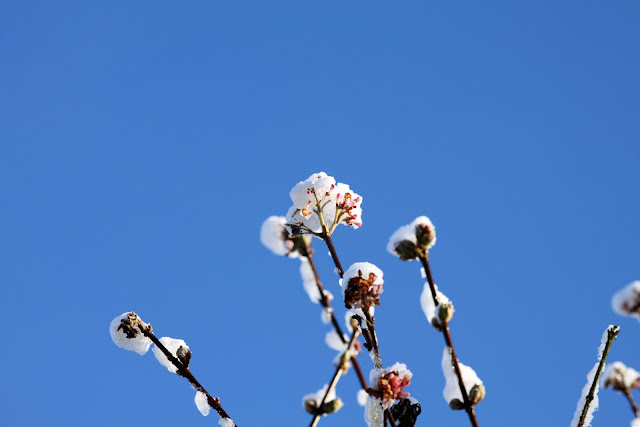 Snow has finally arrived at Tumbledown Farm. It is not just a gentle dusting of icing sugar either, but great big drifts of snow smothering everything in sight with its icy white kisses. 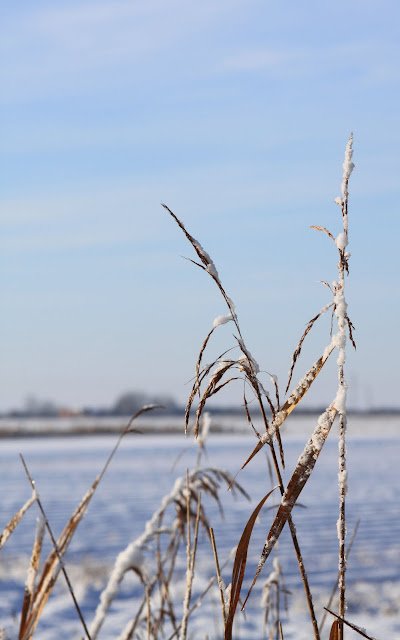 The snowy flatlands of South Lincolnshire. 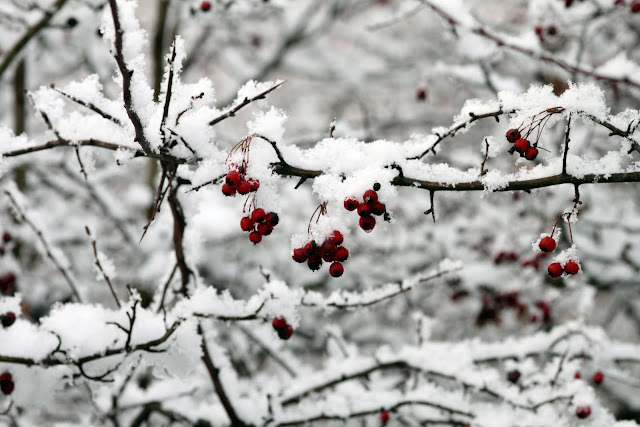 The birds are particularly unimpressed with the weather. I don't think I have ever seen quite so many grumpy black birds sat about the place. There are a few berries left for them to forage and we have put out extra food for them. However they remain unimpressed about having to dust off a thick layer of snow from the branches before they can perch on them. 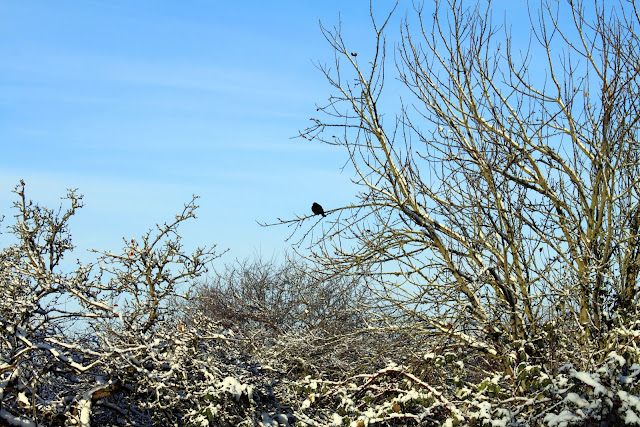 The tale of the grumpy black bird. 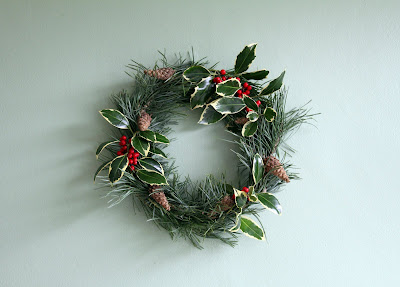 In an attempt to be festive I have started to make a few Christmas decorations. This is something I have never really tried before as I thought it would be far too difficult and time consuming. However after seeing that all the chaps have been busy this year making wreaths and decorations I thought I better have a go myself. I soon discovered that making a Christmas wreath was actually quite fun and I was very pleased that I managed to gather all of the things I needed to make it from around the smallholding. I stuck to a very simple design of fir and ivy. I bent an old coat hanger into a circle and then fixed pieces of fir to it with flexible garden wire. When I had covered the hoop I added a few sprigs of holly for a dash of colour. 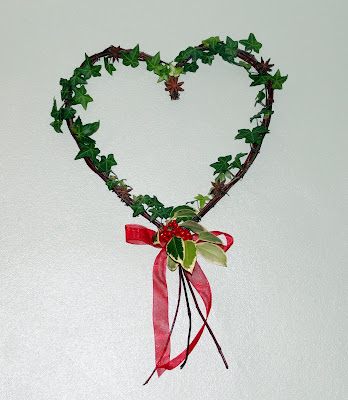 I then tried to make something far more fanciful and girly! I cut several red dogwood stems and attempted to weave them into the shape of a heart. This was perhaps a little adventurous as the stems really did not want to hold the shape, preferring instead to randomly lose shape and smack me on the nose when I was least expecting it. After a long battle I wrapped the stems with ivy, added a few star anise, a sprig of holly and a ribbon and then firmly nailed the damn thing to the wall before it could smack me on the nose again! I should have know it wouldn't be all plain sailing, but I'm glad I persevered as I have some decorations I really like that didn't cost me a penny and a sense of pride that I managed to make them myself. 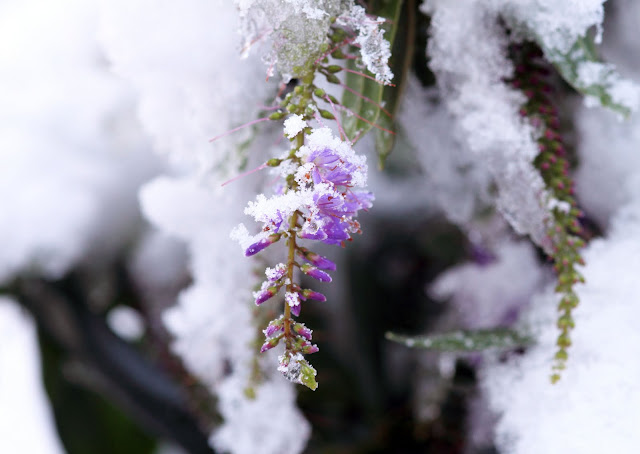 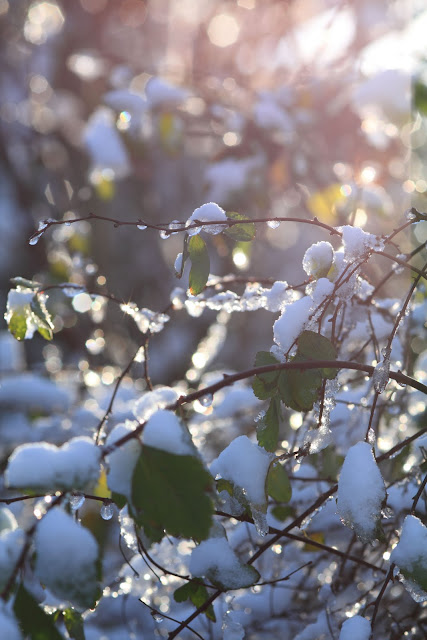 Icy jewels in the afternoon sun. 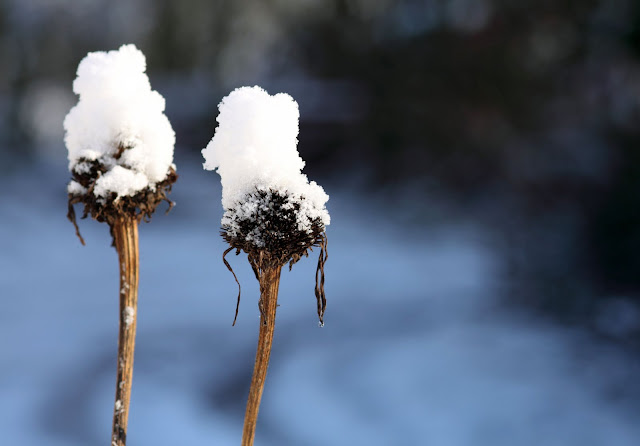 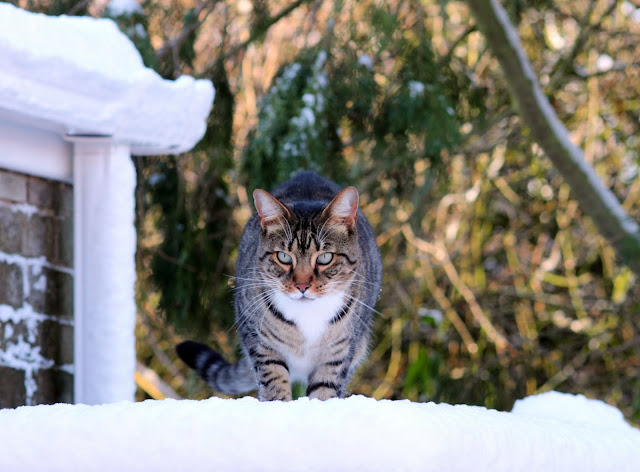 
The cats have not been impressed at all with the weather. Silvi has not even ventured from the warmth of house. Leo, our hardcore tiger admirably tried to battle the elements but was tucked up on the sofa warming his toes by lunchtime. Stilton did his best to supervise me in the garden as usual but he was not impressed with the snow. In fact his language as he followed me around the garden was rather blue, but he carried out his supervisory responsibilites to the best of his abilities. I was immensely pleased about this for once as just over a week ago he was laying in the vets hooked up to a drip fighting for his little furry life. So for me the best Christmas present this year is to have him trotting around after me shouting his complaints and shaking his soggy paws at me. 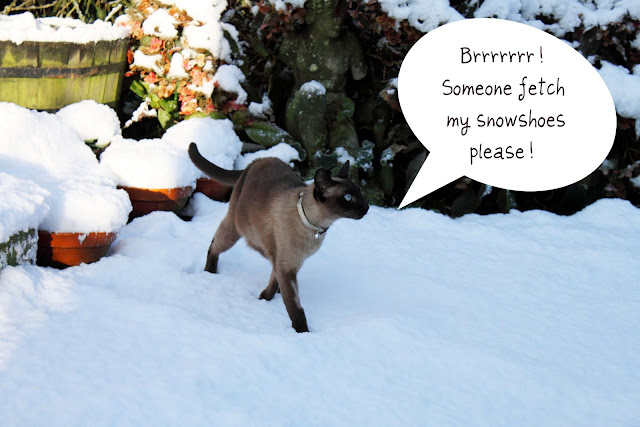 Stilton giving his orders as usual.

Posted by Rothschild Orchid at 23:38

Beautiful photos of your snowy garden... your wreaths are quite lovely... It is good to have the heart shaped one safely wrapped, so as not to hurt you further. Glad of your kitties recovery. Clever last shot ,,, it all works perfectly. Happy almost Winter Solstice.

I like your wreaths very much. You did a good job. I admire your snow from afar. The "icy jewels" photo is beautiful. Have a very merry, white Christmas!

Your photos are just so beautiful. Somehow you are able to capture the stark contrasts in colors. My favorite picture is the bright red berries and branches against the snowy backdrop.

Beautiful photos, and I am very impressed by the Christmas wreaths.
I am so glad that Stilton is well x

Loving the wreath and jealous of the heart (going to steal that idea!). Dogwood is great to work with but I'm glad I'm not the only one who gets bopped of the nose. The backlit snowy branches are beautiful, especially the berries. Oh to have a small holding! Maybe some day....

P.S. My Hubby is an archaeologist, must recommend your blog with all your news stories down the side.

Feeling out done by the men folk?

Only kidding. Your wreath looks great and the heart is gorgeous too. I was so surprised with how easy it is to make these decorations and from now on I will be making as much as I can. Do you understand how easy it is to get the bug now?

Lovely photos, no such snowy scenes here... Very disappointed, we had a peppering which was rained away last night, then we've had a little more snow overnight but this is even more pathetic than the last lot. It's barely even covering my decking.

I'll have to get gritting anyway in case anyone slips over.

Good morning and thank you for all your comments :o)

It has snowed again in the night here and so everything has dissappeared further under the blanket of snow. It looks like it is trying to snow again right now.

Liz, Stilton is very vocal. He is not afraid to shout orders at me, in fact I believe he considers it his duty to! *sigh*

Hi Ryan, yes I do think I may have caught the decorating bug now, apart from the dogwood wrestling I fround it quite relaxing. Stilton loves the knitted booties, he says he'll have two pairs in gold please to do with his new blingy Christmas collar.

Beautiful snowy pics, glad to hear that Stilton is fit enough to carry out his duties. I know what you mean about grumpy black birds, and disgruntled cats, somehow they make you feel it's all your fault.

But they say Siamese are very vocal. Glad to hear Stilton is back on duty. I love your wreath. Wish I had holly, and berries ...

Luckily Stilton is only half Siamese, he's nicely chatty (except when he's cold and then he moans rather a lot), Silvi on the other hand is full Siamese and boy do you know it, especially when he can smell roast chicken!

Lovely snow photos and good for you doing the wreaths. I am pleased your cat is recovered.

I like your wreaths - they're very pretty! Seems like it's snowing unusually much this year - we're probably having a white christmas which is quite unusaul...
Merry Christmas!

The snow pictures are indeed very beautiful. Stilton does have lovely blue eyes. Wishing you a blessed Christmas!

What beautiful photos! I live in Colorado and can't get enough snow so I'm jealous of all your fluffy powder! I found your blog through BlogFrog and wanted to come over and say welcome! If you have any questions or suggestions for how we can be better, please let us know. So nice to discover your blog.

You have inspired me RO. I have some red dogwood, some ivy in the garden and himself's safety specs in the garage! Glad to see that Stilton is looking most alert.

Glad to hear that Stilton's well again! The snow pictures are lovely. Unfortunately, over here it's supposed to go above zero again over Christmas, so I'm enjoying my snow while I can.

Lovely job on the wreaths! I know where you can get a job in a flower shop if you want one, (of course, there is usually more snow then that in Canada, brrr).

A joy to visit and view your lovely photos, so perfect for this beautiful season.

I love your blog! And especially your beautiful cats!

Stilton looks very handsome dressed up in his santa hat and bowtie. I've got fake reindeer antlers for my cat, but she won't play ball and let me put them on her.

What an absolutely delightful wintry scene~Ice jewels is a perfect backlit scene! and your wreathes are lovely...Have a happy holiday, gail

So glad Stilton is back being the top cat again.

Here's to a wonderful Christmas and New Year to everyone at Tumbledown Farm.

Dear RO
It's Xmas chaos time here, burning my fingers as I baste the roasting turkey!
I must ask you to give Stilton and Silvi extra holiday cuddles from California. And Leo? Is he too cool to be cuddled? Hope not ;)
xo
Alice

I'll give the boys extra cuddles, although Leo comes with extra spikes. It's usually best to wait for him to ask for a hug otherwise one takes their life in the own hands when approaching him, he is a TIGER!