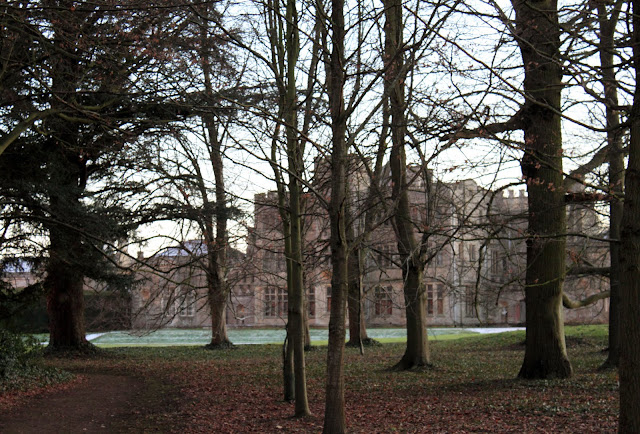 Rousham House through the woodland. 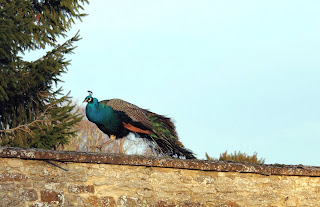 As I have been merrily blogging about various summer garden visits for a while now, I thought I better at least try and go around a garden in winter. Last year I visited Anglesey Abbey and thoroughly enjoyed its winter garden. This week I decided to try somewhere different. I have been driving close by Rousham on a weekly basis for some months now, so a visit seemed to be long overdue. I pulled up late in the afternoon and was instantly greeted by one of the residents (left). It was refreshing to get out of the house after a week of snoozing on the couch festive activities. 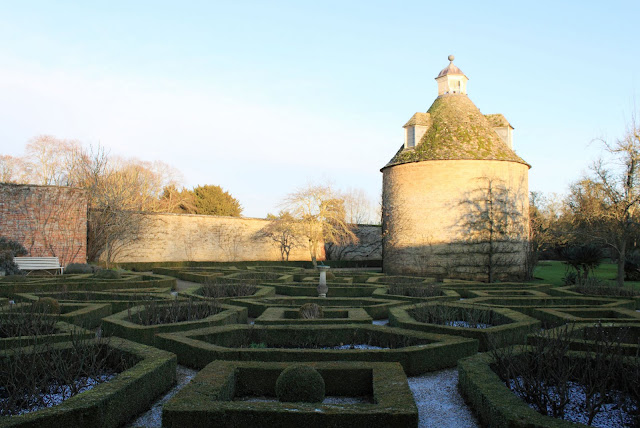 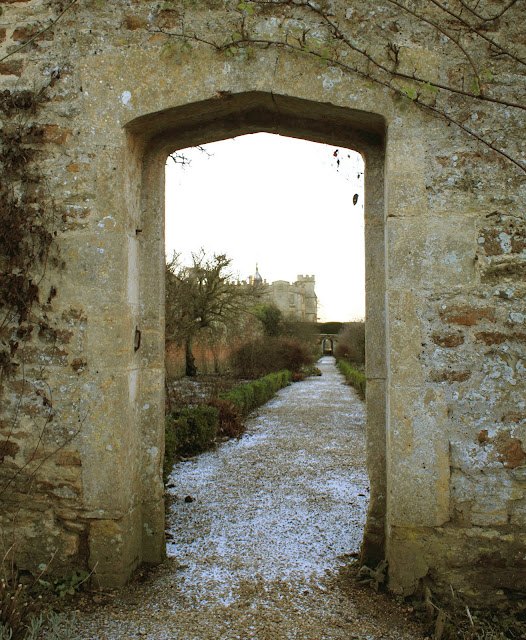 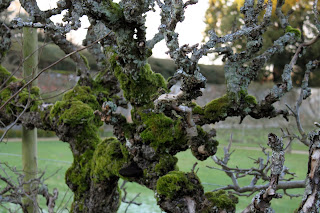 I knew almost nothing about the garden before I arrived. I like it that way. For me part of the fun of visiting a garden is discovering it for myself, to enjoy its quirks, planting and design elements without being told what it is that I should be appreciating. I did chose to visit Rousham as I was aware that it is considered to be an 'iconic' garden, but beyond that I had no idea what to expect. I had the garden to myself. Leaving the peacocks and the car park behind me, I set off in search of the ticket office. After following the signs, I found the ticket machine and offerd up my £5 to it. 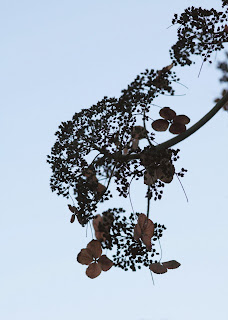 Rousham has no coffee shop, no gift shop and no attendants. There's no frills, no pressure to spend £10 on a cup of tea and half a shortbread biscuit; there is just the house, the garden and the rolling countryside beyond.

A light powdering of snow lay on the ground, which gave an added crunch underfoot. I was in the final hour of afternoon sunshine and the grounds were eerily quiet. There was little plant life to see in the walled garden area save for the espalier fruit trees whose gnarly trunks were covered in moss and lichen and had a certain air of distinction like much of the garden. Seeing a garden in January like this showed me its bare bones, allowed me to see the skeleton of the garden and the landscape laying beyond it. It was much easier to appreciate features such as the wrought iron gate to the walled garden and the beautiful pigeon house flanked on one side by a sea of box hedging. Basic, formal, and very elegant. For once I did not feel disappointed that the borders were not spilling out plants. 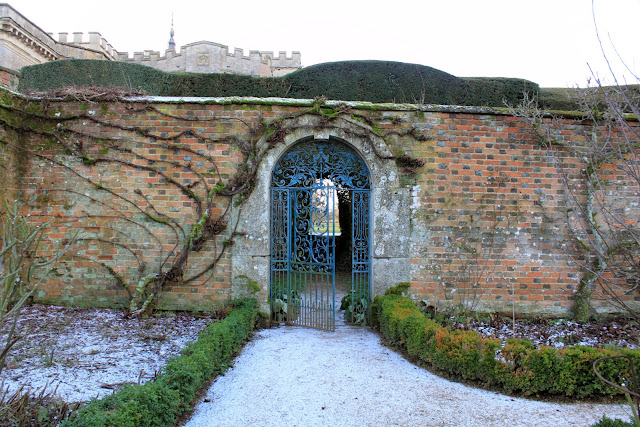 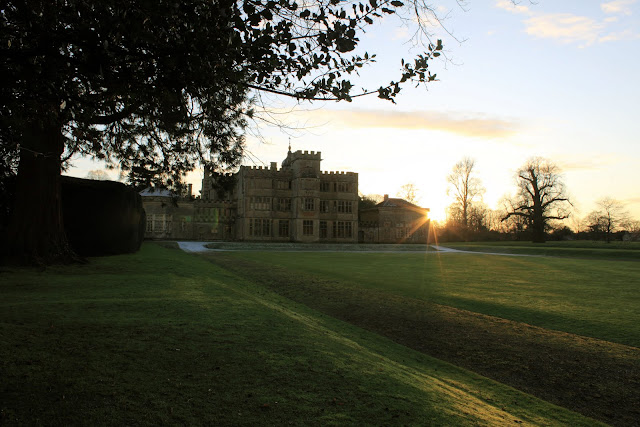 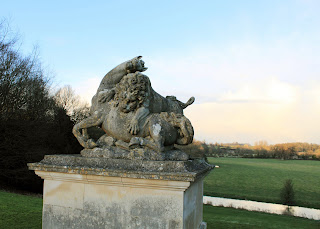 Rousham is an imposing Jacobean house. It was built in 1635 by Sir Robert Dormer and still remains in the possession of the Dormer family today. Charles Bridgeman laid out the framework of the garden in the 1720's but Rousham is most famous for William Kent's classically influenced designs introduced into the gardens in 1737. The gardens surviving at Rousham today represent an almost untouched example of the first phase of English landscape design. 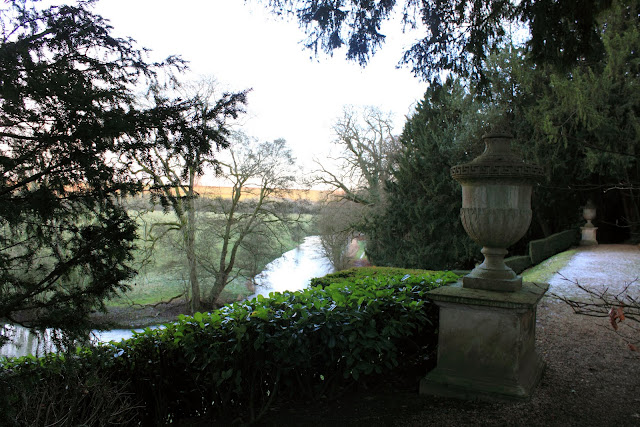 View of River Cherwell from the Praeneste Terrace. 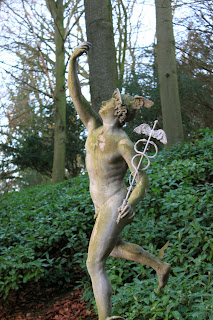 The grounds were full of classical sculptures. On the upper terrace a rather savage lion attacks a horse and as you leave the lawns and head towards the river Cherwell the woodland area is filled with figures such as Mercury the winged messenger of the gods. Surprisingly the statutory seemed to rest with ease in the landscape. The failing light and cold weather made the wooded areas feel mysterious, with figures resting on the edge of the woodland. The statue of Apollo at the end of the long walk was particularly impressive with mist rising behind him. The use of limited light to make a statue appear enigmatic reminded me of my undergraduate studies and visits to ancient Egyptian temples where statues of deities were kept in darkened sanctums and lit only by the smallest rays of light. It felt as if Kent was trying to achieve the same effects in the garden at Rousham as the ancient Egyptians except he was using the landscape as a sanctum rather than architecture. 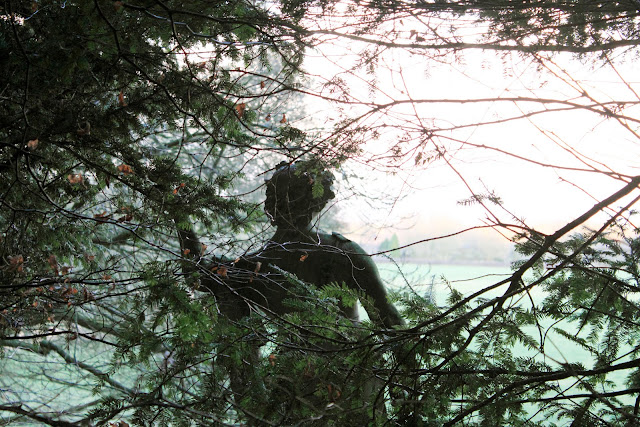 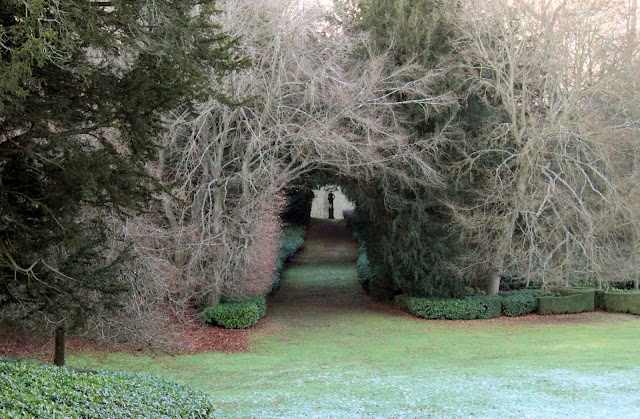 The long walk and Apollo. 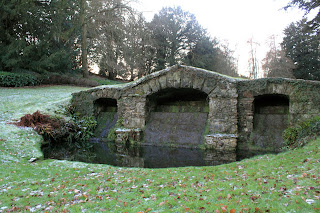 I very much enjoyed my time in the gardens at Rousham. It was a pleasant and peaceful way to pass an hour or two. The surrounding landscape and snaking river Cherwell were stunning and Kent's use of classical features in the garden was intriguing. The Vale of Venus was the most visually striking in the winter landscape with its bare trees and snow dusted grass 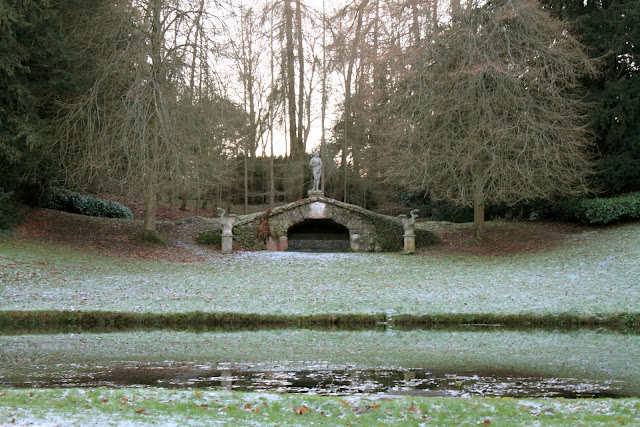 The Vale of Venus upper cascade and octagon pond. 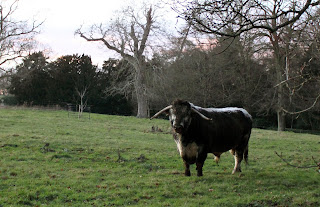 The land surrounding the house was also home to some incredibly beautiful rare breed longhorn cattle. Close to the house was a small family group with a cow and her young calf and a very large bull. I stood and watched him for a while; he was busily sinking his horns into the field and digging up great clods of earth and grass. I'm not quite sure what he was hoping to find but he certainly seemed to be enjoying himself! 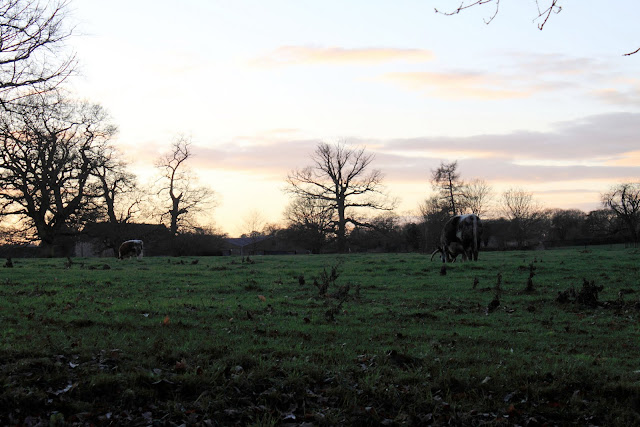 Posted by Rothschild Orchid at 22:48

Very nice photos, the gardens look very magical and I can imagine are amazing to walk around at any time of the year!

Wow, even pigeons in England have nicer digs and gardens than I do.

Thanks for the tour, and cheers from Alaska,
Christine B.

Wow! That was a yummy trip through a magical garden. I was captivated by the doorways into the walled garden. Hmmm, Mysterious.
Thanks for the tour!
Cindee

Wow..this is way over the top beautiful!! Mega awesome.I wanna jump inside those pictures! Love that gate!!Hey..love your new header..super gorgeous!Great job!

Thanks so for the wondrous tour of Rousham. Seen through your eyes and lens ... it is filled with light and mystery. The wrought iron gate and long walk way to Apollo are lovely. I will add this one to my wish list. Thank you! I love your new header photograph. Carol

I've been waiting with bated breath since our Tweet in regards to Rousham! Thank you so much! This is my second favourite garden in Britain - though I have never personally been there! Your virtual tour is by far one of the best I have witnessed thus far! Gorgeous post. I am sure I shall be back to revel in its magic time and time again throughout the long winter that lay its cold mantle at my feet!

What an incredible place! I wish I could drive by that everyday!

What a fantastic tour. I had never seen photos of this garden before; I think winter shows what great structure it has. I really like the statue in the woods and the long walk with Apollo, but all the scenes are gorgeous. Lucky you to have such a place close by!

Gorgeous! I've not been around for a while and had forgotten what I was missing on your blog! Jack

Ooh that's been on my list of places to see for ages! Thanks for the tour and I'm even more determined to visit now :)

Fantastic garden! Love it! Thank you so much for the great pictures and commentary.

Thanks RO - I enjoyed looking round Rousham with you as a guide :) I imagine that it must have been special having the place to yourself. It's been on my list of gardens to visit for some time.

This is a garden that sparks the imagination. The austere winter look lends a mysterious quality to the photos making me yearn to visit such a fascinating place.

Thanks for sharing these photos - it never occurs to me to visit a garden at this time of year.

I think winter is a great time to visit gardens. You can really see the "bones" (structure) of the garden. This one is just so beautiful. Thank you for sharing it with us.

Just taken all my Christmas decorations down and was feeling really depressed until I read your blog and saw your photographs! Really cheered me up - lovely photographs! Thank you!

Oh, my... these photos are incredible. I am curled up next to a fireplace visiting blogs, the snow is blowing sideways outside the window in a bad storm. This was a marvelous escape. :))

What alovely and interesting garden even at this time of year.

You completely conveyed the wonder of this place.
Magical garden I first saw at age of five. You seem to have had a fab day to be there too, it being so quiet, so that you could really soak up its atmosphere.
Thanks
Robert Webber

Another magical journey, albeit in cyberspace.
I'm seriously thinking about a return to England... but wouldn't know where to begin planning at this point. It's head-spinning to think about how many gardens/landscapes deserve a visit in England, let along all of G.B.

Beautiful place indeed.... so many years must have passed by to come to such beauty. ~bangchik

Thanks for the tour. It's great to see a garden looking so good as a skeleton. Interesting to see Kent's name - I've just been reading about him.

Thanks... I am incredibly jealous and happy all at the sametime. I love old gardens...such a wonderful collection of photos.
Rosey

Lovely tour! Reminds me of my term abroad at Harlaxton in Grantham. Harlaxton's gardens were once much better, and if I had oodles of money I'd fund their resurgence. Anyway, took me back to when I was 20! If only the flight wasn't so long, and expensive these days.