Part III of our series of special guest blogs by wildlife gardener and writer Aspidistra. The blackbird sits somewhere in the middle of the garden pecking order.

The snow, I find, has been messing with social etiquette. People you would rather not hear from have been ringing and there can be no escape, no pretence of being out or doing unfeasibly interesting things. You are in, and a sitting target for unwanted calls. Denial is useless. I too, have unashamedly used the snow as an excuse for a spot of social beavering. I thought it would be the ideal opportunity to re-kindle my friendship with the owner of a grand estate and garden. No stoops are too low for me to fall to on this occasion, as I engage in a spot of snow-call harassment. It seems to me that I should have been to the manor born and it has been a great disappointment in my life that I am not somehow attached either via marriage or good fortune to some huge garden with a pleasing aspect and acre-age, where people use words like verily and forsooth in everyday conversation. Failing that, I thought perhaps that by mere telephonic communication such a friend I might somehow elevate me into the world of House and Gardens.

But my calls have gone unanswered and partly, I suspect, this is due to the Great Pecking Order of People. I am a person of no importance in the world, whilst the owner of a Great Estate is not. In this harsh weather it is cruel indeed to see how the birds act out the pecking order with fierce aggression. In my world, the seagull reigns supreme, then the magpie, followed by Mr Jackdaw, then the blackbirds. The starlings are partial to mob rule, as are the anarchic invading fieldfares, leaving the robins to take out their aggression on each other and everyone to bully the small brown jobbies and the pretty tits, whose brave colours and jolly flitterings belie the dangers of freezing to death because the big boys won't let them near the bird feeders. 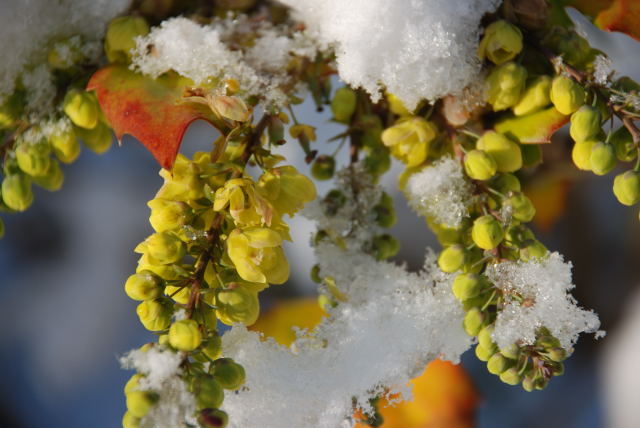 
So where am I in this great pecking order of life? Somewhere in the middle, neither a teeny weeny thing but not an eagle either, I am probably a bit of a blackbird at heart although I'd rather like to be on the rare birds list. But one of the joys of gardening is that all sorts of us gather around the bird feeder of our enthusiasm, as it were, from the stately home owner to the allotment gardener, we are as one when talking about our gardening. Well nearly. I am often delighted, when going around a charity opening for a grand garden, how it often turns out that the old boy taking the money at the entrance, with the battered straw hat, twinkly eyes and kind smile, will often turn out to be Lord So and So, the owner. His wife will be somewhere fussing about helping to serve teas or chatting about the roses. This type of owner, for whom a certain wealth and lifestyle was often inherited are a delight to encounter. They are often very generous and one is glad that a beautiful garden is tended in their hands. While they are high up in the pecking order, they will happily allow the little birds to feed around them.

Last year I met another kind of owner at an NGS open garden. Instead of the usual assortment of faithful oldie volunteers plucked from the local village, she had her own staff at the entrance and the household maids serving the tea. As I arrived, a pleasant young Polish gardener was taking the money and directing us into the garden. But apparently not directing us exactly correctly. The owner, one of those handsome, middle-aged women who has married into money, strode up barking instructions to him, ending in a fine telling off for the poor chap. It was excruciating to witness such bad people management and public humiliation at what was meant to be a lovely charity garden opening. But Mrs Posh Big Garden Owner was completely oblivious to us. We, the little brown jobbies were waiting for her to finish berating her staff before we were to be allowed to profer our pounds and put one horribly uncouth foot forward into her charming garden. Here was the vicious bird in the pecking order, just like the fieldfare who nearly killed a blackbird in my garden the other day, wounding it where a mere warning flick of the wings might have been just as effective. 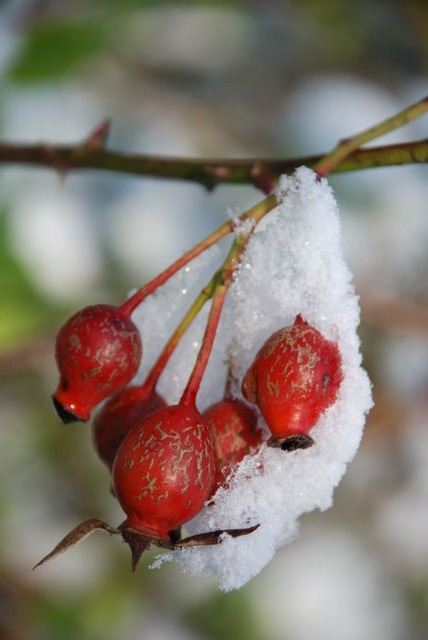 Rosehips waiting for dispersal by our feathered friends.

And so I went around one of the finest rose gardens in the south of England with something stuck in my throat. Even more so when we got to the teas, where instead of the welcoming mob of incompetent locals serving their strange home-made cakes, lovingly baked from recipes circa Mrs Beeton, we were confronted with tiny slivers of fat-free sponges cooked up by the Phillipino maids. These were offered at twice the price of the normal NGS garden cakes, by the unhappy servants, making the whole experience deeply unpleasant.

I pondered on this beautiful garden for many months after visiting it. Yes, it was beautiful and future plans were wonderful and ambitious. But that simple lack of a smile and lack of generosity of spirit by the owner means it is a garden I can never, ever love. For perhaps a gardener without generosity creates a garden without soul.

I must away. The big boys have gone and I think it is time for me to get my five minutes at the bird feeder. Thank you all for tolerating my guest blogs.

Posted by Rothschild Orchid at 00:01

I have so enjoyed reading these guest blogs, especially this one about the different personalities of people and how a glorious garden without the spirit of generosity leaves a nasty taste in the mouth.
thanks for sharing!
Dan
-x-

Ooo thank you so much, the pleasure is all mine and all that. Will guest blog anywhere for cake.

This is a great post. Maybe because of the way my province is laid out and its relative youth (400 years of European/etc colonization, versus thousands of years in Britain), we don't have the equivalent estates and posh gardens and obnoxious, inbred horsefaced entitled people with berated staff. Your story somehow reminded me of the story of the Selfish Giant; maybe this woman allowed people in, but merely for a price, making her worse than the selfish giant. Bah humbug to her.
I've a nice raspberry almond torte here; have a slice. It should take the icky taste away of those dried sponge fingers. ;-)

As a new blogger I was thrilled to discover your site. And what beautiful images. I especially loved the first picture of your(?) cat; sadly I lost mine in late November after 12 years. What an interesting idea to have a guest blogger - keeps the writing fresh.

Hi Edith, so pleased you dropped by. The blog header is indeed of my cat Stilton, although Stilton would have it that this is his blog and I am the hired staff.

I'm sorry to hear you lost your cat recently, we lost one of ours just before Christmas, it's just so upsetting isn't it?

(Dogs have owners. Cats have staff)

Jodi, I like the Selfish Giant analogy, I'd forgotten about that story! Thanks for the piece of raspberry torte, delicious. If only Rothschild's Orchid could cotton on to the importance of feeding guest bloggers cake...

Sdly oh so true but I have found amongst garden bloggers a generosity of spirit that has seemed a great leveler.

Thank you so much for becoming a 'Follower' of my blog. I do hope you will enjoy what I write although I shall never, sadly, be able to match your pictures which are superb.

Looking again at your previous blogs, I felt I should say what splendid images of Rousham - one of the all time great gardens and one which for me holds very special memories.