The Malvern Spring Show 2010 Show Gardens Part II: The Good, The Bad and The Ugly. 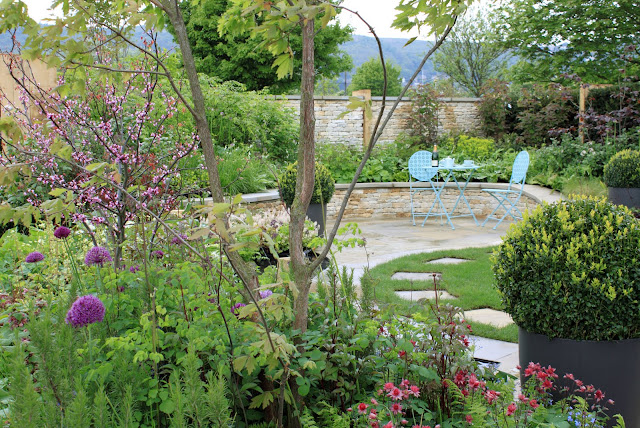 The Youth of Old Age Garden designed by Mark Draper. Gold and Best in Show.

As promised here are a few more photos of some of the Malvern Show gardens. Sadly the weather was grisley, but some of them still managed to shine through. I have already shown you my favouite garden by Mark Everleigh in a previous post. In the interests of balance I have included a range of the gardens from the show here. I must confess however to not liking all of them. I can appreciate that a lot of hard work has gone into them, but hey you cannot please everybody all of the time! There were some cracking gardens on display, some of which I sadly just could not get near enough to photograph properly. The Youth of Old Age garden above was the only other garden to win a gold medal in the show and took the overall title of Best in Show. It is a garden designed for a mature couple who enjoy outdoor life. I thought it was a very clean and beautiful design. It was easy to see why it proved so popular, not least because it has elements that can be easily applied to many peoples gardens at home, but if I am truthful it did not give the same warm fuzzy feeling that the The Wellbeing and Recovery Garden did! 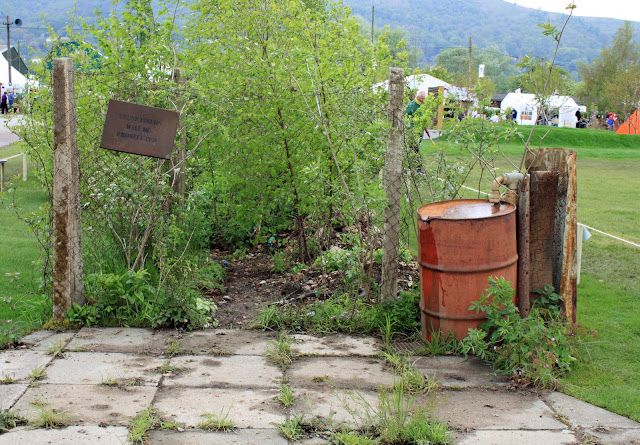 Losing Control, Releasing Nature by Foundation degree landscape and garden design students at Otley College. Awarded a Silver-Gilt.
O.K. so this is where I am going to show my garden design ignorance. If the word "garden" had not been attached to this piece of work and it was displayed in an art gallery I believe I would have found it quite a clever reconstruction. However, I looked at this in the early morning drizzle (admittedly I hadn't had my coffee) and I just thought to myself "You have to be kidding? How is this a garden?" For the garden Losing Control, Relasing Nature the students of Otley College have recreated a piece of derelict industrial land located near a residential area in Suffolk. My question is, is this really a garden? 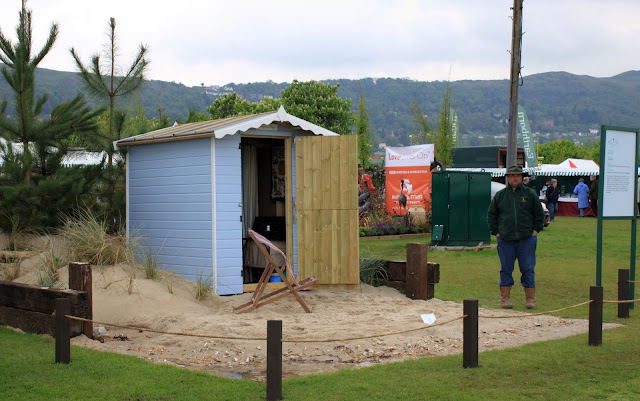 I am afraid I asked the same question when I reached the Halcyon Days garden shown above. Is it really a garden? Its a very pretty bit of habitat reconnstruction for sure. I think it must be too subtle for me as the inner me is shouting "Its just a bit of sand with a beach hut on it!" I know, I know I'm an uneducated yob where garden design is concerned, I honestly felt that these two displays were habitat reconstructions and not gardens, or are they the same thing? What do you think? 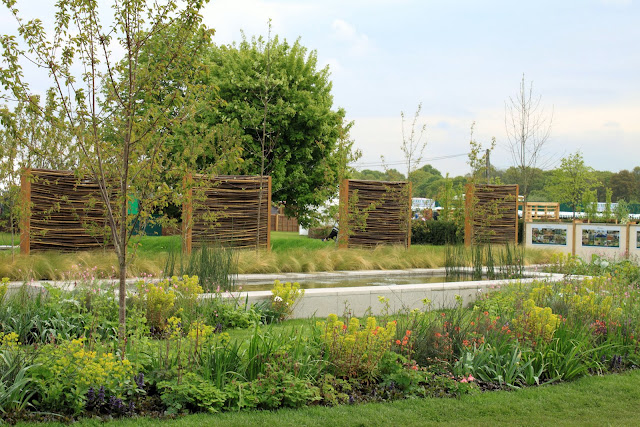 The 25th Aniversary Garden was rather a large affair, it was pleasant enough, I could quite happily have sat and had my lunch in it and the swathes of Stipa tenuissima were quite splendid. I shall refrain from making any comments about Teletubbies and the second half of the garden... 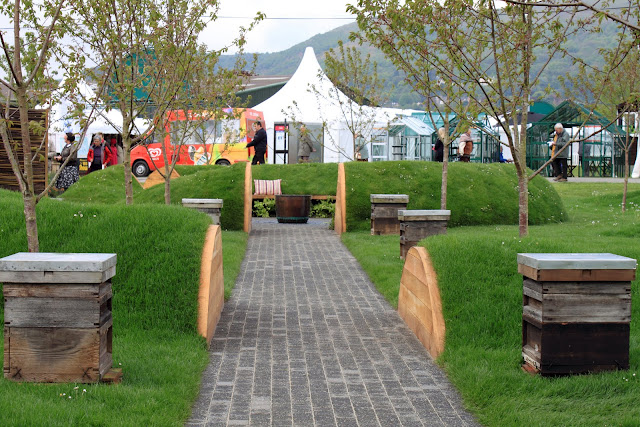 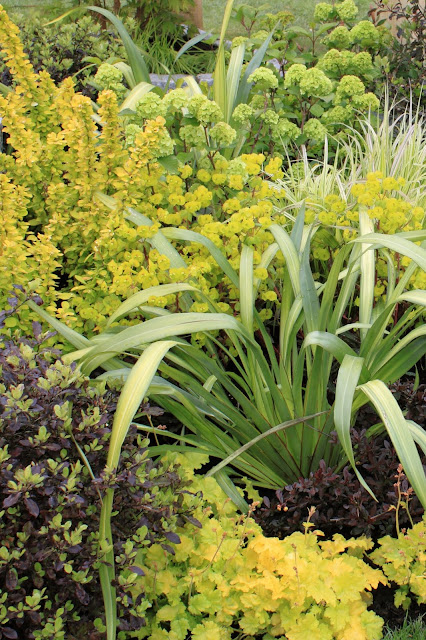 Planting from the Illusions of Man Garden by Frances Dunham. (Chris Beardshaw Mentoring Scholarship)
There were several gardens that were part of the Chris Beardshaw Mentoing Scholarship. They were a bright and unusual mix, but sadly few appealed to me. The theme appears to have been circus' and does not seem to have translated well into many of the gardens. Whilst the overall design of the Illusions of Man garden did not grab me, its yellow, green and purple planting was very eye catching. It also had a wonderful stream of sedums and sempervivums (see the last photo in Karens post). Jenny Chandlers Roman Gifthorses garden inspired by the Roman Circus was interesting and had tried to incorporate edible and medicinal plants know to have been used duing the Roman period into the design. 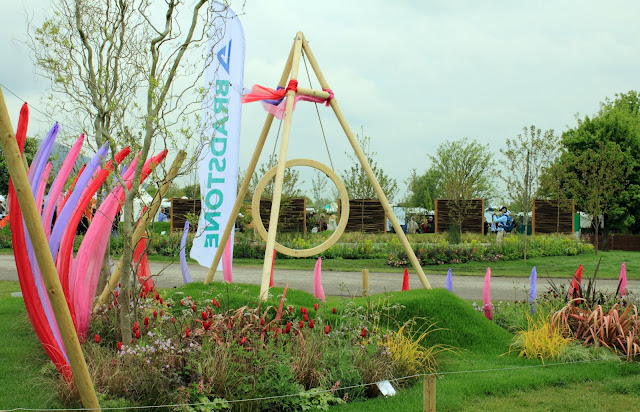 There were two gardens that I really just could not bond with from this group. It is not until now that I have realised that they both have something in common in that they both contain rather silly floaty textiles in them. I am not sure if this is part of the reason I do not like them but for me Lyra's Garden by Kate Bratby is too loud. I really do not get on with the explosion of plants or the colour and every time I look at it I hear the music from the Bodyform advert (so sorry Kate)! The other garden is Water Pirouetting for a Colourful Audience by Maria Luisa Medina. Again I think there is just too much colour for me and the wrong ones, especially in the textiles used. It is like something that has escaped from the early 1990's. I am sure these gardens will have appealed to many of the show visitors, they just were not my cup of tea. I will be interested to see how next years mentorship scheme theme of "Atom" will be represented. 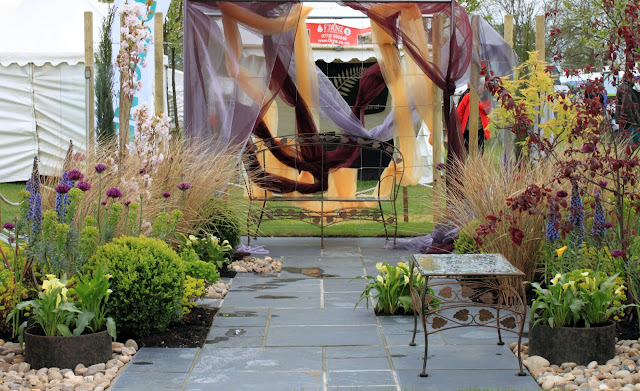 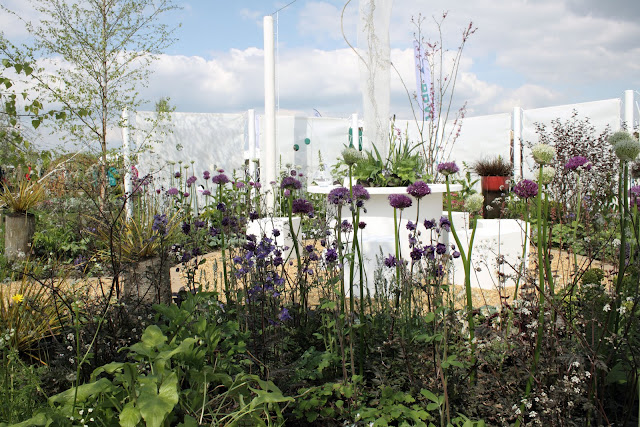 For me one of the most interesting of the scholarship gardens was Barry Chambers' Juggling the Balance garden. It is a community garden with the aim of fusing the concepts associated with both traditional and modern circus. The planting was like many of the circus gardens, rather unusal, but not without appeal. Its edges started off as weeds and moved to more common herbacious perennials with I think some edibles at the centre. 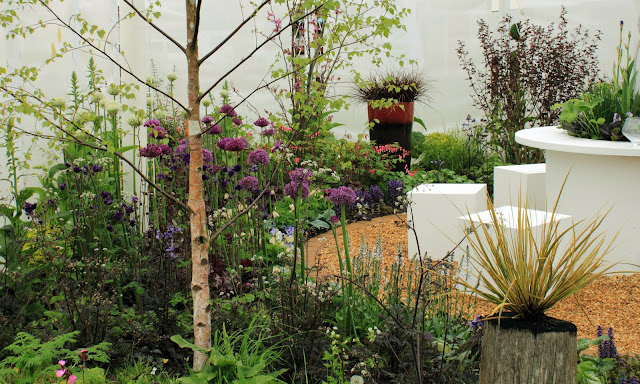 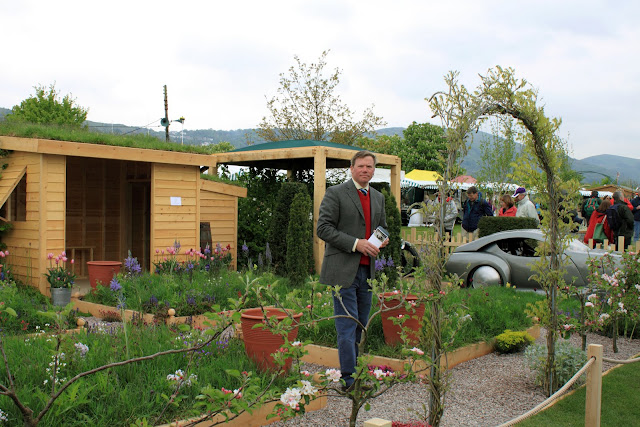 The Morgan Garden by Craig Hamilton-Smith. 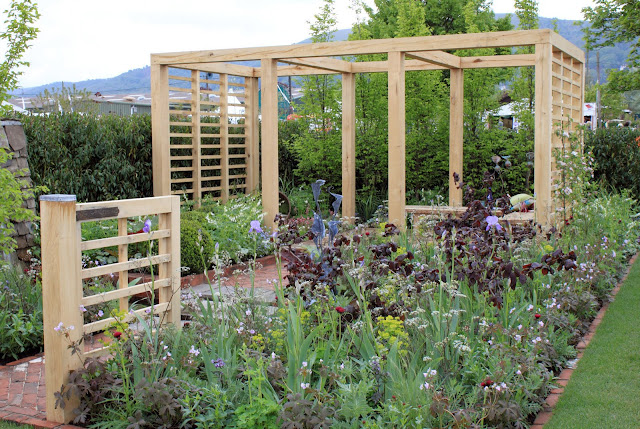 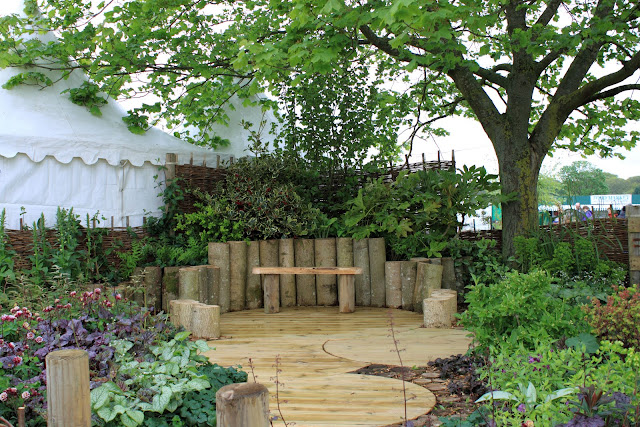 I was rather fond of The Woodland Edge Garden by Mark Walker for the Woodland Trust and particularly liked the way he built the design up around one of the trees already on the showground. 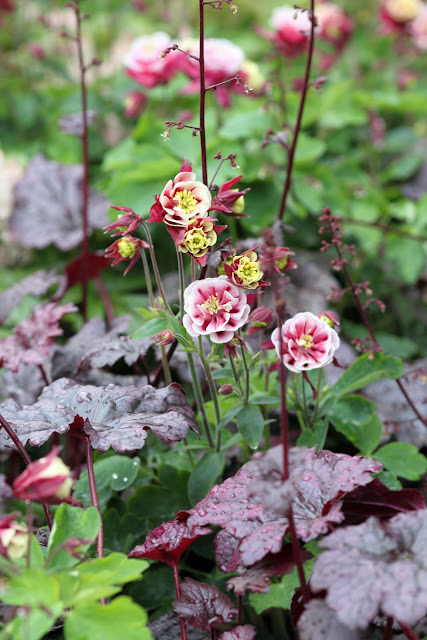 Aquilegias and heucheras from The Woodland Edge Garden. 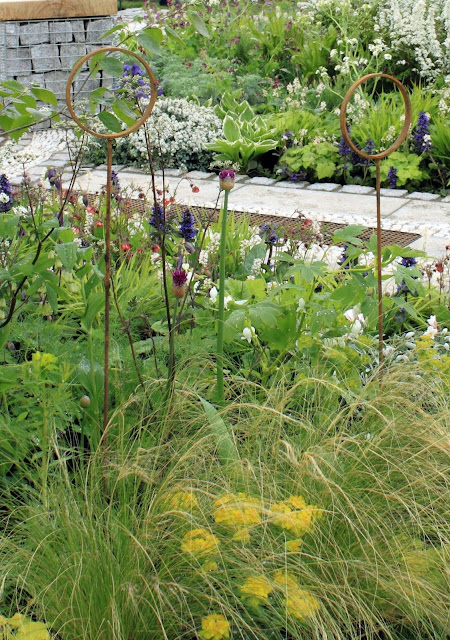 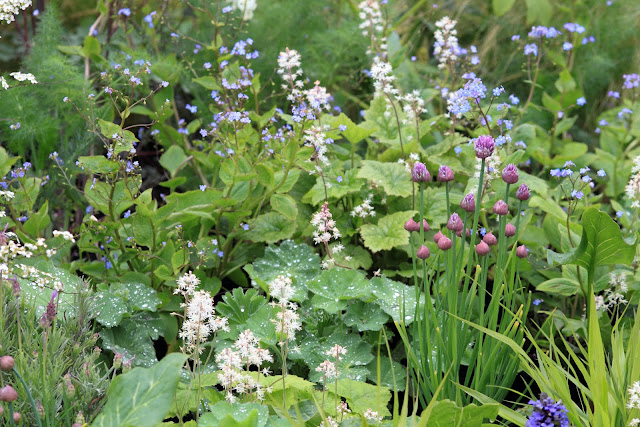 Planting from The Quaker Meeting Place Garden.
Posted by Rothschild Orchid at 19:38

Another excellent account, thank you. I think we'd have been muttering in agreement if we had toured the show together!

I agree with lots of your comments there, RO. I had to resist the urge to pick up the litter in the Otley College garden. At least I assume that the litter was planted there deliberately - now I'm not so sure, it was quite windy.

I, too, am looking forward to 'Atom'.

The Youth Of Old Age Garden was well designed, but I am sure the choice of Garden Furniture was not suitable? Perhaps wicker garden chairs with nice plump cushions would have been more appropriate. The Quaker Garden was very aesthetic, lovely graceful planting and inviting one to enter.

Glad to read a good balanced account of the gardens on display,. I too just didn't 'get it' a lot of the time and thought them very disappointing at times xx

Hmm. So what makes something a garden? I guess for me it has to have living plants of some kind, and a collaboration between a gardener, who plants to plants or somehow puts a design in motion, and those plants (which never do exactly what you envisioned when you designed).

I was particularly happy to see your photos of the woodland edge garden. My next project is a garden built around some existing trees at the edge of the woods, and I can definitely get some inspiration from this garden. Thanks. -Jean

I must agree... I liked very few gardens on this post, though I did very much like the garden from the last post. Maybe because I am such a natural garden lover, a huge fan of Oudolf and Noel Kingsbury, that the "habitat reconstructions" and overly thematic gardens just don't do it for me. I used to subscribe to Garden Design magazine, but gave it up when it seemed more about modern furniture and paving than plants! I prefer the little old Country Gardens Mag. sometimes overly cutsie, but mostly sweet and about plants... I;d have loved to have seen more of those kinds of heartfelt gardens at a show like this!

Impossible to take it all in ... After seeing your lovely post, I can certainly see 'centering down' in The Quaker Meeting Place Garden. Thank you for sharing.

Anyone able to identify that very fine-leaf small tree in the Juggling The Balance garden?

Great photos. I agreed with whoever made the comment about the unsuitable patio seating in the aged garden. It was the first thing that struck me when I saw it ha ha. Am I petty?

As one of the students who worked on the Otley College / UCS (University Campus Suffolk) Garden I completely understand your point of view, however, I have to say that the proper definition of a 'garden' ranges from a piece of ground on which flowers etc are cultivated to - a fertile region (Chambers Dictionary, Chambers Harrap Publishers Ltd, Edinburgh, 2003 p.608)

I think it fair to say that what we portrayed was 'Natures Garden'. You have taken some wonderful photographs of many of the gardens and the shame of it is that you did not show the beautiful planting around the pond at the far end of our garden which was planted as nature intended. The entrance to the industrial site was an ugly entrance by design.
Having said all that, this was my first RHS Show and I was lucky to be part of a great team. I thoroughly enjoyed the adventure but not the freezing cold nights camping out! Everyone working on the other gardens was incredibly friendly and watching all the gardens come to life was a sheer joy. I feel very lucky to have been part of it all. If you get the chance - I thoroughly recommend it!

I am really pleased to hear that you managed to have a good show dispite the horrid weather. I cannot believe it is supposed to be May, I do hope it gets a bit warmer in time for Chelsea.

This dictionary definition of a garden is where I get confused, as I had understood it literally to mean that a garden should be in some way cultivated and the description of your project led me to believe you had tried to create a reconstruction of a derelict piece of industrial waste land and not an area that was being tended by man in any way, which suggested it was a habitat reconstruction rather than a garden to me.

Whether I liked it or not is irrelevant, as you have had a successful show and it is an impressive creation, I can appreciate that. I shall look out for your future designs with great interest,

Thanks for the tour, RO - I watched the TV coverage yesterday (on video) and it's interesting to see some more of the gardens, and to see them from a different perspective. I liked the Quaker and Woodland Edge gardens best on GW and I think I still do, though Juggling the Balance looks great in your photos too. I agree with you about all the multi-coloured drapery, and about the habit reconstruction - I too have what I suspect is an old-fashioned belief that a garden should be more about planting than than it is about artwork or habitat. Great to have some feedback from one of the designers about that though - and it's always interesting to see different people's ideas: life would be very dull if we all liked the same things!